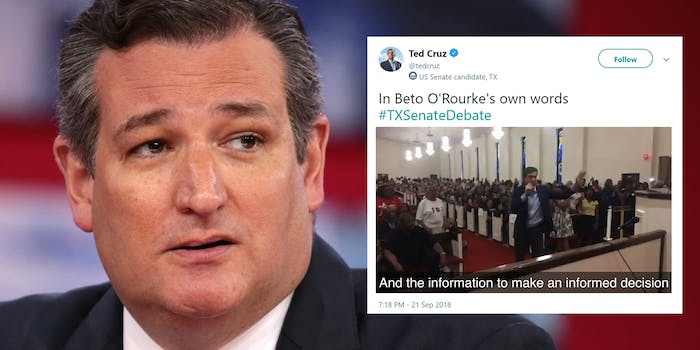 It's inspiring, but it isn't of Ted Cruz.

On Friday, Sen. Ted Cruz (R-Texas) tweeted a video clip that showed a fiery, passionate, rousing speech addressing a recent murder in the community. The crowd bursts into applause and audience members leap to their feet.

It’s an inspiring bit of campaigning, but Cruz isn’t the candidate in the video—his opponent, Rep. Beto O’Rourke (D-Texas) is.

Cruz captioned the tweet, “In Beto O’Rourke’s own words #TXSenateDebate,” with no other context about why he was sharing the video.

In the clip, O’Rourke is addressing the murder of Botham Shem Jean, a Black man from Dallas who was murdered in his own home by a police officer.

“In this day and age, in this very year, in this community, that a young man, African-American, in his own apartment, is shot and killed by a police officer. And when, when we all want justice, and the facts, and the information to make an informed decision, what is released to the public? That he had a small amount of marijuana in his kitchen. How can that be just in this country? How can we continue to lose the lives of unarmed black men in the United States of America at the hands of white police officers,” asks O’Rourke in the clip.

It seems that Cruz tweeted this particular clip to demonstrate that he is firmly on the side of law enforcement—even when the law enforcement officer in question has been charged with manslaughter, has admitted to shooting Jean, and was just dismissed from the department.

Subsequent tweets and retweets suggest Cruz is trying to position himself as the law enforcement candidate:

I think it is offensive to call police officers modern day Jim Crow. That is not Texas –> https://t.co/Qpn6kYs8hQ #TXSen

I choose @tedcruz for #TXSen because I agree with Ted that the vast majority of police officers are brave, honorable men and women who risk their lives to keep us safe: https://t.co/VoqNmS7LLi RETWEET if you do too! #TXSen #ChooseCruz

The original clip featuring O’Rourke has garnered 42,000 likes, plus a number of replies—the majority in support of O’Rourke.

So…. you're endorsing @BetoORourke? Cause otherwise, this makes absolutely no sense…

Every time I see your "face only a blind mother could love", I send Beto $20 from Illinois. You're costing me this week. Stay off the tube you butt ugly dog.

Dude, your social media team has a thing for @BetoORourke . Course a lot of us do, but it's funny that you're still paying them to promote him.

O’Rourke further endeared himself to voters with a video of himself air-drumming to The Who’s “Baba O’Riley” while going through a Whataburger drive-thru after the debate he had with Cruz on Friday.

Cruz is apparently banking on the idea that Texans will support a pro-police candidate despite the unsettling facts of the Jean case and the number of high-profile cases of white police officers killing Black civilians with impunity.

As Vox points out, Cruz’s message implies that the idea of a candidate calling for justice for an unarmed Black man murdered in his own home is wrong.