'It is stunning, what is happening here.'

In an interview this week with Fox News host Megyn Kelly, senator from Texas and presidential candidate Ted Cruz was adamant about “unequivocally” standing with county clerk Kim Davis. Davis found herself behind bars after a judge found her in contempt of court for her refusal to issue marriage licenses to same-sex couples in Rowan County, Kentucky.

“This is fundamentally wrong,” Cruz told Kelly via satellite, “and it’s inconsistent with the first amendment of the Constitution.”

The portion of the Constitution’s first amendment which Cruz refers to states that “Congress shall make no law respecting an establishment of religion, or prohibiting the free exercise thereof.” This constitutes the Establishment Clause and the Free Exercise Clause, which were intended to separate religion from the United States government.

The term “separation of church and state” was originally coined by Thomas Jefferson, when he wrote:

“I contemplate with sovereign reverence that act of the whole American people which declared that their legislature should ‘make no law respecting an establishment of religion, or prohibiting the free exercise thereof,’ thus building a wall of separation between Church & State.”

So, when Cruz tells Kelly that the implications of Davis’ jailing is that “Christians can’t hold public office, or if they do, they must be willing to violate their faith or go to jail,” he’s half-correct: If Davis personally feels that her job is in violation of her faith, it’s definitely a personal problem for her, and probably means she can’t hold office.

However, when organizations like ReligiousTolerance.org and The Gay Christian Network exist, it’s clear that plenty of Christians could take her place and lawfully perform their duty.

Cruz may have been right about one thing, though: This might be the first time that we’ve seen a Christian woman thrown in jail for standing up for her own faith in this country—but it’s certainly happened to a man before. A guy named Bob Roethlisberger who previously arrested in Georgia for driving the so-called “Truth Truck” near a mall: 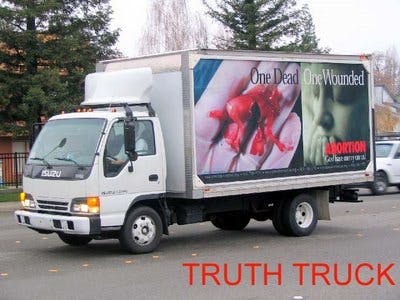 Cruz has started a petition to allow others to stand with himself and Kim Davis—you can find it here. The petition calls for:

“…every Believer, every Constitutionalist, every lover of liberty to stand with Kim Davis. Stop the persecution now.”

People belonging to those three groups will not all be signing Cruz’s petition, if the reactions to Cruz’s stance are any indication:

@tedcruz I stand for the Constitution. I'm sad to see that you do not.

@megynkelly @tedcruz is ok with not following laws. You cant pick and choose Laws are laws. Dont agree SENATOR, change the law. DO YOUR JOB