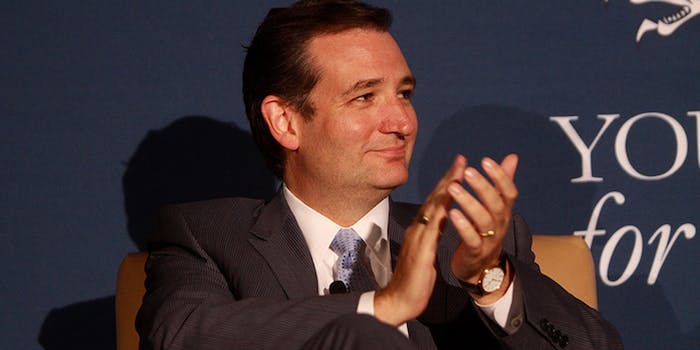 Because a president can not survive on Big & Rich songs alone.

In an interview on Tuesday, recently announced Republican presidential candidate Ted Cruz (R – Getting on TV) said that he stopped listening to rock music after 9/11.

“My music taste changed on 9/11,” Cruz told CBS This Morning. “I actually intellectually find this very curious, but on 9/11, I didn’t like how rock music responded and country music, collectively, the way they responded, it resonated with me.”

“I had an emotional reaction that said, ‘These are my people,'” he continued. “So, ever since 2001, I listen to country music.”

This statement is kind of weird, and not just because the dude just admitted to changing what type of music he personally enjoys because it theoretically polled better with the Republican base. It also ignores the actual content of a lot of rock music, which has a tendency to celebrate less the superficial outward tropes of Americana, but rather the fundamental essence of what it actually means to be an American.

Both as a retort to Cruz’s assertion of rock’s anti-American proclivities and as a precaution against the implications of having a president who exclusively listens to Big & Rich, here’s a list of some of the most truly American rock songs of all time, most pulled from the early 2000s era that Cruz just barely missed:

The Mountain Goats — “Color In Your Cheeks”

On The Mountain Goats’ lo-fi magnum opus All Hail West Texas, hyper-literate singer-songwriter John Darnielle penned a ode to America’s oft-stated (but only intermittently achieved) ideal of welcoming immigrants, like Cruz’s Cuban-born father or the originally Canadian right-winger himself, with open arms and warm, inviting kitchens.

“They came in by the dozens, walking or crawling/ Some were bright-eyed, some were dead on their feet/ And they came from Zimbabwe or from Soviet Georgia/ East St. Louis or from Paris or they lived across the street,” Darnielle sang over a simple guitar arrangement. “But they came, and when they finally made it here/ It was the least we could do to make our welcome clear.”

No matter how cynical you are about American ideals, “Color In Your Cheeks” presents a beautiful sentiment that anyone should be able to get behind

Tool — “Hooker With a Penis”

On “Hooker With a Penis,” the legendary prog-metal band’s lead singer, Maynard James Keenan, recounts a conversation he once had with some of his young fans. The fans accused Keenan of “sellin’ out/ layin’ down/ suckin’ up/ to the man.”

Keenan’s retort is one about the basic nature of capitalism. The only way those fans had heard about Tool in the first place is because, “I sold out long before you ever heard my name/ I sold my soul to make a record.”

Selling out, Keenan argues, is the basic condition of every participant in a market economy and any conception of “the man” is misguided. “If I’m the fucking man/ Then you’re the fucking man as well,” he screams, ” So you can point that fucking finger up your ass.”

Once upon a time lil’ Miley Cyrus was just another fashionable young transplant from Nashville, Tenn., amid the bright lights of Los Angeles. She felt awkward, out of place. Until she heard a Jay Z song playing on the radio and a Britney Spears song spinning in the club. Culture, Cyrus suddenly recognized, was universal. You can make instant connections with people from all walks of life based on a shared appreciation of art. Outside of warplanes and government debt, America’s pop culture is truly the country’s greatest export.

What’s more American than a mass of automobiles all freely acting on their own volition to trigger a massive traffic jam? Stop off for drive-thru on the way and it’s the equivalent of getting the preamble to the Constitution tatted on your neck. California alt-rockers Cake have long had a fascination with America’s automobile obsession. The band’s 2001 track “Long Line Of Cars” isn’t just an ode to jalopies, it’s also a testament to personal responsibility. “This long line of cars is trying to get through,” croons John McCrea in his trademark monotone. “And this long line of cars is all because of you.”

Ted Leo and the Pharmacists — “Ballad Of The Sin Eater”

Ignoring the conventional wisdom of the stats geeks at FiveThirtyEight, who argue that Cruz is “too extreme and too disliked” in Washington to win the nomination (let alone the general election), a Cruz administration would have to deal with an litany of international crises. On his 2003 travelogue “Ballad Of the Sin Eater,” punk poet Ted Leo criss-crossed the globe from Leeds, England, to Kigali, Rwanda, looking for some measure of enlightenment and absolution, but all he finds are people harboring grudges against Leo simply for being who he is—a white, privileged American tourist.

As a crash course in international relations, Cruz could certainly do a lot worse.

The Right Brothers — “Bush Was Right”

It’s the punk rock, right-wing version of “We Didn’t Start the Fire.” And it goes a little something like this:

Freedom in Afghanistan, say goodbye Taliban
Free elections in Iraq, Saddam Hussein locked up
Osamas staying underground, Al Qaeda now is finding out
America won’t turn and run once the fighting has begun
Libya turns over nukes, Lebanese want freedom, too
Syria is forced to leave, dont you know that all this means

The chorus you ask?

Drive-By Truckers — “That Man I Shot”

The song highlights the moral ambiguity of a solider in war killing an opponent, both of them simply following the roles prescribed long in advance. As such, it tends more toward the anti-war camp than flag-waving jingoism, but it strives to capture the experience of an American on the battlefield in a way steeped with both honesty and humility.

Sometimes, expressing national pride is as simple as self-definition—the act of saying I am a human being who lives in a country and I am proud of that. Rarely are rock songs so straightforward on topics that don’t involve bragging about having consequence-free sex with attractive people or whining about not having enough consequence-free sex with attractive people; however, hipster godhead James Murphy’s “North American Scum” is of another breed entirely.

While cloaked in a thin layer of smirking irony, the track is a celebration of what makes Americans simultaneously great and infuriating. “We are North Americans/ And for those of you who still think we’re from England. We’re not, no,” Murphy deadpans. “We build our planes and our trains till we think we might die, far from North America/ Where the buildings are old and you might have lots of mimes.”

The Rolling Stones — “Sympathy For the Devil”

The Rolling Stones may be widely considered an indelible part of the counterculture, but their 1973 hit “Sympathy For the Devil” is remarkably conservative. Here are some of the things that Mick Jagger chalks up to the work of the devil: the murder of Jesus Christ, the Communist takeover of Russia, and the moral relativism that makes people think “every cop is a criminal and all the sinners saints.”

That’s why the New York Times listed it as one of the 10 most conservative songs of all time.

Liam Lynch —“United States of Whatever”

America is all about freedom. The freedom to do whatever you want all the time with no thought to what repercussions your actions might have to other people, the environment, or society as a whole. It’s all about the freedom to yell “whatever” right in the big, dumb face of anyone who tells you different.

There are a lot of songs about the effect 9/11 had on the American psyche and Tori Amos’s “I Can’t See New York” is probably the best one. The song is told from the vantage point of a young woman stuck in an airplane circling high above Manhattan’s smoldering embers, wondering what’s happening 13,000 feet below while unable to land. The track overflows with uncertainty and confusion—likely a more accurate representation of the American mood in the early 2000s than any of the mainstream country embraced by the now-presidential candidate.

The closing track to the Floridian punk band’s breakthrough major label debut New Wave, “The Ocean” was singer Thomas James Gabel’s wish for a better life—one that involved getting married and raising kids along the Gulf of Mexico. Cruz’s rigid Christian morality may not approve of the singer wishing to do it as a woman—later transitioned into living as a woman under the name Laura Jane Grace. After her transition, Grace became one of the highest-profile public figures in the trans community. Grace’s desire for domestic bliss is as American as apple pie or, as the band intoned on its similarly brilliant follow-up record, as smashing the white anti-abortion crosses on the side of interstate highways.