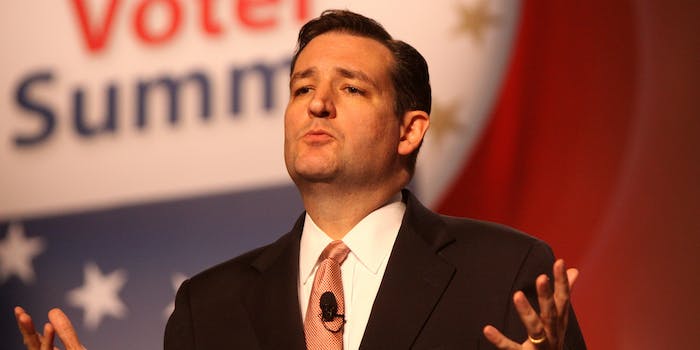 Are “millions upon millions” of Americans really rising up against Obamacare?

When Congress first announced the end to the 16-day government shutdown on Wednesday, Sen. Ted Cruz (R-Texas) claimed it was a “remarkable victory” for the “millions upon millions” of Americans who rose up against Obamacare. “I would venture to say that virtually every person across this country has seen… their premiums go up and up and up.”

The obvious question, as Mother Jones Washington Bureau Chief David Corn wrote on Friday, is whether or not that’s actually true.

After Cruz’s speech, Corn reached out via Twitter to the Pulitzer Prize–winning fact-checking outlet PolitiFact.com to find out whether or not Cruz’s claim that “virtually every person” saw their healthcare get more expensive with the Affordable Healthcare Act.

Before PolitiFact could respond, however, tweets began pouring in from Corn’s followers:

@DavidCornDC My mom & sister, who both have chronic health conditions, will save thousands a year due to ACA. They are excited.

All told, Corn posted more than 80 responses to his inquiry. And while the left-leaning journalist readily admits his Twitter feed isn’t a nonbiased sample, it does make for a pretty good case against Cruz’s claim that virtually every American saw her healthcare costs rise.

On Thursday, PolitiFact weighed in on Cruz:

The fact is, the majority of Americans already have insurance and Obamacare has had little impact on their premiums… Cruz’s comments don’t take into account the many people who will get subsidies as they shop on the health care marketplaces. People making less than 400 percent of the poverty level will be eligible for subsidies. If these people have been able to afford to buy their own insurance before the law, then they should see substantial decreases in their premiums thanks to the new regulations and subsidies.

In conclusion, PolitiFact wrote, “We rate his claim False.”