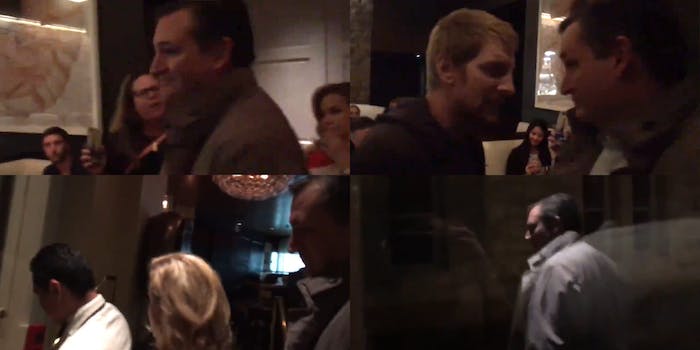 Ted Cruz was chased out of a D.C. restaurant Monday night.

The Senate Judiciary Committee, which Cruz sits on, will hear testimony from one of Kavanaugh’s accusers on Thursday.

A video posted by Smash Racism DC depicting protesters following Cruz through the restaurant quickly went viral and sparked a conversation online about propriety when it comes to protesting.

The first video shows Cruz and his wife, Heidi, trying to find their seats while a woman, who says she is a survivor of sexual assault, questions him on his Kavanaugh stance.

“Hi, I’d love to talk to you about Brett Kavanaugh tonight,” the woman begins the video, focusing the camera more on Heidi than him. “I know that you are very close friends with Mr. Kavanaugh, do you believe survivors, sir?”

When she pressed him on his position, Cruz rounded the table to shake her hand.

“God bless you ma’am,” Cruz said. The woman filming responded with, “Bless you as well. I really appreciate you,” before informing them that as a survivor herself, she believes all survivors.

“There are now three people that have come forward,” she continued, “and who have said that Brett Kavanaugh has attacked them. I know that you’re close friends with him, did you talk to him about that?”

Cruz and his wife quickly realized that the protesters did not intend to leave them to eat their meals without an answer to their questions, so the couple headed for the exit. The second video depicts the two trying to make their way through the chanting crowd. Cruz asked them to make way for his wife as they passed through the line of increasingly enthusiastic protesters, who continued shouts of “we believe survivors.”

The past year has seen a sharp rise in public confrontations of Trump officials. Secretary of Homeland Security Kirstjen Nielsen was confronted at dinner over the summer with shouts of “shame” in the wake of the child separation policy put in place by the administration, and former EPA Director Scott Pruitt cited protests against his family in his resignation letter.

The video quickly went viral, as people on both sides of the aisle commented on the protest.

Sen. Ted Cruz was apparently chased out of a DC restaurant last night. Let’s chase him out of the Senate next. And then the country.

Well deserved & thank you to those who disrupted his meal. Cruz swarmed by protesters at DC restaurant @CNNPolitics https://t.co/Lvaj2Euw2V

Others criticized the behavior as “heckling.”

This DC Restaurant situation involving Sen. Ted Cruz reminds me of just how little and pathetic democrats are.

The democratic party is the party of violence, shamefulness and degeneracy.

Ted Cruz heckled by radicals in DC restaurant:This group represent precisely how Nazis act there act of intimidation are acts of cowards who only hunt in packs. Not one of them have any courage. But all should stand convicted of racism against people of one political view.

Staff asked the protesters to leave at the close of the video, a request which they appeared to obey.

Cruz is running for re-election in the fall, trying to hold on to the Senate seat he has occupied since 2013 against Democratic challenger Beto O’Rourke.