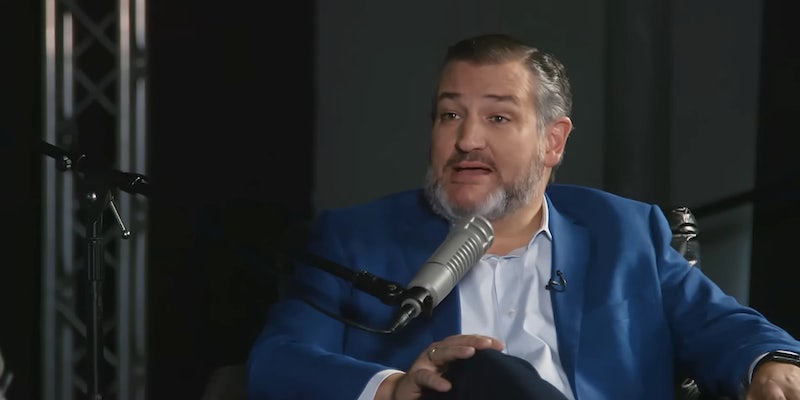 The senator hasn't commented on the issue since deleting his tweet.

Sen. Ted Cruz (R-TX) helped spread a fabricated news story on Friday that was admittedly created by a meme account on Twitter.

In a now-deleted tweet, Cruz accused “The Left” of being “beyond parody” while sharing a screenshot of an alleged article from The Atlantic.

The article, supposedly written by Abby Ohlheiser, is titled “The Evolution of White Supremacy” and appears to label Muslim parents in Michigan as “the new face of the far right” for opposing schools that teach “pornography to children.”

But the article does not actually exist. The screenshot was created by a Twitter user known as “Prison Mitch, Great Meme Wars Vet,” an account that is admittedly dedicated to “meme making & shit posting.”

The fabricated article was made just days after protesters opposed to LQBTQ books shut down a school board meeting in Dearborn, Michigan, making the premise seemingly appear likely among conservatives such as Cruz.

Yet even ignoring the fact that a simple search reveals that no such article was ever written, the listed author of the fake story provides further insight into the claim’s validity.

Ohlheiser noted on Twitter that she had begun receiving harassing messages even before Cruz promoted the screenshot, which had already gone viral on Facebook and elsewhere, despite not having worked at The Atlantic in a decade.

“It’s for sure good and normal to wake up to dms calling you a groomer because some maga shitposter photoshopped your byline onto a fake article for a publication you haven’t worked for in a decade,” she wrote.

Cruz has thus far declined to comment on sharing and deleting the fake story on Twitter. The Daily Dot reached out to the creator of the fake screenshot but did not receive a reply in time for publication.