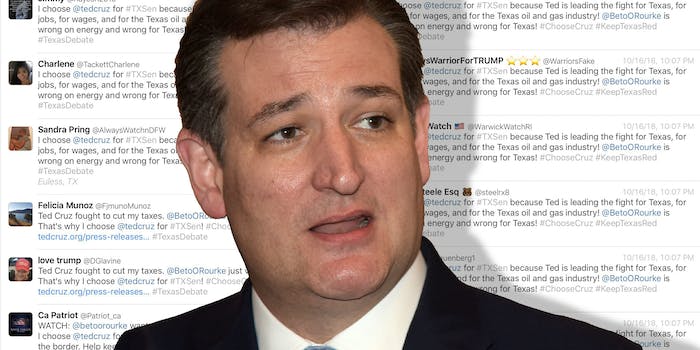 It's not shady, even if it seems that way.

In the tweet, Bruce Lesley, president of a D.C. based advocacy group, said “Cambridge Analytica is working hard tonight,” pointing out a string of identical tweets that endorsed Cruz.

Look at these identical tweets at identical times from various accounts. Not original human responses.

That tweet soon racked up 7,000 faves, going viral in the middle of the debate. The only problem: The behavior Lesley was pointing out has nothing to do with Cambridge Analytica.

The data firm became a boogeyman when it was revealed it harvested Facebook data and used that infrormation to help President Donald Trump target voters in the 2016 election. Cruz also had an association with Cambridge Analytica in the 2016 primaries and was using its data to help build voter profiles.

However, Cambridge Analytica went under long ago, after a string of stories exposing its improper use of data. And the identical tweets being pushed out during the debate were not from a data firm but from a template.

This tweet has more than 3500 RTs and is clearly false. Cambridge Analytica is bankrupt and does no current work. The Ted Cruz tweets being spread are thru an ad template. https://t.co/eczQjtUa0d

Lesley may have been joking—he did not respond to a request for comment—but the virality of his tweet is evidence of how fast misinformation can fly around the web. People picked up and ran with Lesley’s assertion. It even got shared by a host from Pod Save America.

How sad that @tedcruz has to buy his enthusiasm https://t.co/zJ443RKYrp

Others then jumped on.

This is how you attack democracy. There needs to be new legislation that prohibits propaganda and fraudulent tactics in our politics. When the Cambridge Analytics of the world are fined heavily for this it will help impede the misinformation and corrupt influence. https://t.co/gFVaqFeUR3

#ColludingTed is in bed with Cambridge Analytics- stealing both our elections and our personal information. #VoteBeto https://t.co/ecnC2FBno9

Anyone can use a click-to-tweet function, and while it’s possible some of them are bots and paid, the tweets have nothing to do with the boogeyman of Facebook data.