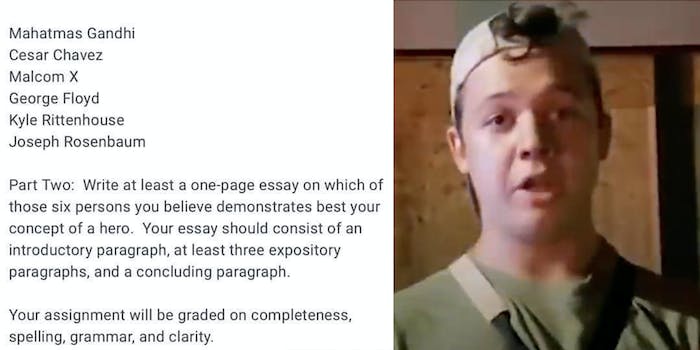 The essay asks students to explain how Rittenhouse is a 'hero.'

Dallas Independent School District is investigating an English teacher after he asked students to write an essay explaining how the Kenosha shooter, Kyle Rittenhouse, is a “hero.”

Rittenhouse, 17, was arrested and charged with first-degree murder after allegedly opening fire into a crowd of protesters, killing two and seriously injuring one. The deadly shooting occurred at a demonstration that followed the police shooting of Jacob Blake in August. Rittenhouse was described as a “white vigilante,” suspected of being associated with a local militia after posts surfaced from his social media accounts that show the teenager armed with heavy artillery.

Screengrabs of the assignment were shared to Facebook Tuesday, consequently causing a stir amongst parents, students, and community members alike, who took offense to the assignment and its implications.

The assignment is titled “Hero for the Modern Age.”

“Write at least a one-page essay on which of those six persons you believe demonstrates your best concept of a hero,” it reads.

Kristain Hernandez told the Dallas Observer the assignment made her younger brother, a student in Ford’s class, feel uncomfortable. “It didn’t sit right with him that a white supremacist murderer was on the same page as people he recognized to be important historical figures,” she said.

One user on Twitter also pointed out that the listed assignment ironically includes a typo in the spelling of Malcolm X, despite stating that students will be graded on “spelling, grammar, and clarity” for their submissions.

After the assignment was posted online, DISD officials reportedly stated Ford’s homework was not approved by administration and has since been taken down. Students are not required to complete the assignment for class credit, the Dallas Observer reported.

Several Dallas ISD trustees posted comments on Facebook after the assignment spread online. One trustee wrote, “I became aware of this earlier today and found it inextricably ridiculous. I’ve already communicated with our superintendent about this and expect follow-up.”

Another said the district “does not comment on personnel matters.”

On Wednesday, Dallas ISD spokeswoman Robyn Harris issued an apology on behalf of the district via email.

“Racial equity is a top priority in Dallas ISD, and we remain committed to providing a robust teaching environment where all students can learn,” Harris wrote. “It is important that we continue to be culturally sensitive to our diverse populations and provide a space of respect and value.”

Harris said that following an internal investigation, “appropriate steps” will be taken to remediate the situation and address Ford’s actions as necessary.