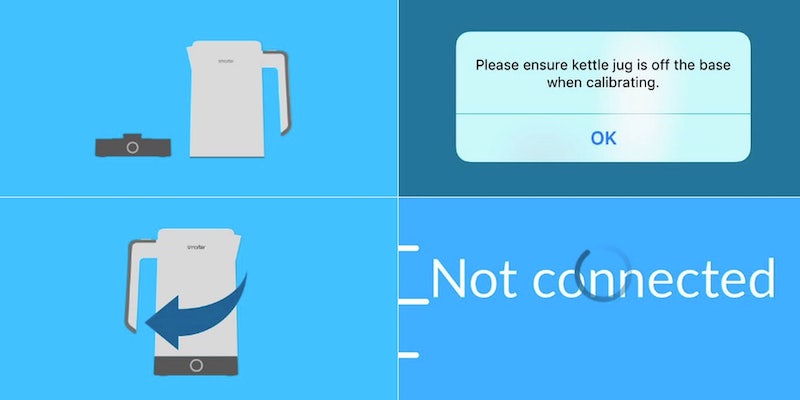 This is everything that's wrong with the internet of things.

We’re all waiting for the day when the promise of a smart home is eventually fulfilled, but there’s no denying that sometimes smart appliances are anything but.

Rittman started around 9am, but quickly ran into trouble.

Three hours later, he still hadn’t figured out how to connect his Amazon Echo to the kettle itself.

All of the attention he received on Twitter was not only distracting, but it was apparently saturating his network.

Now the Hadoop cluster in garage is going nuts due to RT to @internetofshit, saturating network + blocking MQTT integration with Amazon Echo pic.twitter.com/ryd42c5ewj

The descent into madness continued:

Now my wifi kettle is basically taking the p*ss. Told me it had found network, now you need to recalibrate me, oh btw I didn’t rly connect pic.twitter.com/WbGsIrzBio

Part of the issue was that the kettle apparently didn’t really have any software of instructions help with the integration, so he had to hack something together himself.

It is, and OK apart from flaky WiFi connectivity; main issue is that there’s no IFTTT or HomeKit integration, so hacked that together myself https://t.co/0IjD7q4wzM

Finally, some signs of progress:

Well the kettle is back online and responding to voice control, but now we’re eating dinner in dark while lights download a firmware update pic.twitter.com/yPTDoUkM9Z

Pittman did finally succeed, but the results are pretty anti-climactic.

My work is done. And now onto everything else I meant to do today, after that first cup of tea. pic.twitter.com/bJPuJ85TCT

If only there were a simpler way to boil water.