This is what 3 months of SXSW pitches looks like

If a brand doesn’t pitch you before South by Southwest, does it even exist?

SXSW 2015 has begun, and we’re officially in the thick of it. Boozy brunches are being had, branded tacos are being eaten, networking happy hours are being livetweeted.

But most of us know SXSW started awhile ago, long before Austin was invaded. According to my email inbox, my first SXSW pitch goes all the way back to Jan. 4. And then, it never stopped.

SXSW pitch emails are a special kind of PR; they try so, so very hard to convey a mixing of business and pleasure: “Our cofounder, a Stanford grad with his Ph.D., is launching a new social app where you can control a farting avatar of Kim Kardashian! We’re hosting a get-together at a super low-key dive bar best described as glam-meets-cowboy. There will be breakfast tacos and mimosas, as well as a DJ : ). Lil’ Bub will make an appearance! Please use the corresponding hashtags throughout the event. NDA attached.”

So, what would all of that look like? Well, take nearly three months of emails and plug them into a word cloud generator, and behold. 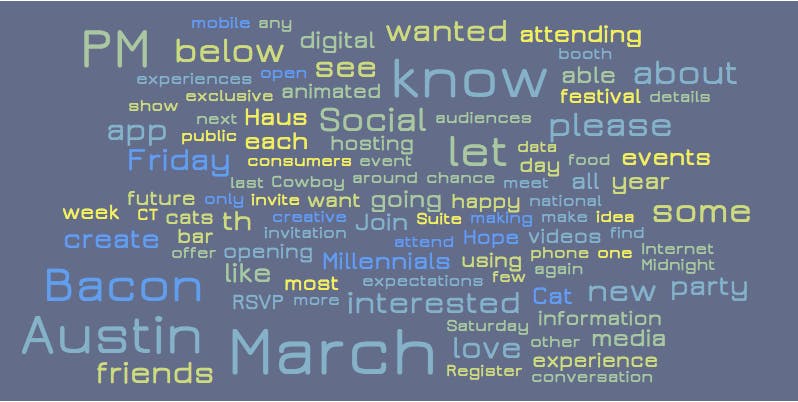 It’s like a marketing-themed pack of those word refrigerator magnet packs.

It paints such an apt picture of the conference: its silliness, its potential, but mostly its deep, unquenchable thirst.

Photo via noluckmurphy/Flickr (CC BY SA 2.0)