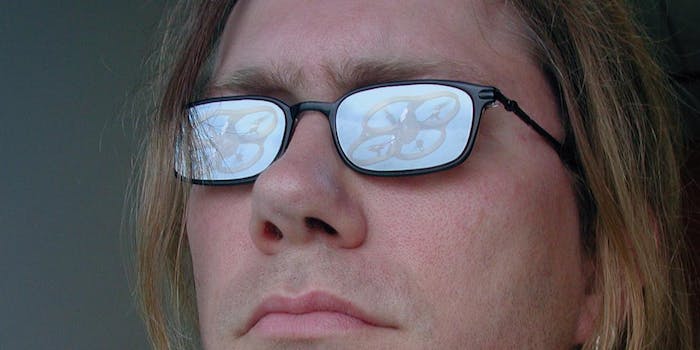 The tech, music, and film conference is officially a no-drone zone.

Shooting an intern with a drone-mounted taser is all fun and games until somebody gets hurt. Well, actually no one got hurt last year during Chaotic Moon’s infamous drone stunt, but SXSW 2015 is officially cracking down on man’s best unmanned aerial friend anyway.

According to a blog post that went up today on the official homepage of SXSW Interactive:

… the airwaves and/or frequency spectrums generally used in the remote control of drones are too congested during the SXSW event to ensure operation safe from interference.

In addressing the potential risk of drones to the public safety of so many drunk SXSW-goers, the prohibition cites City of Austin Ordinance chapter 13-1, which appears to place a cap on the number of “temporary helistops” a heli-thing thing (presumably usually a helicopter) can make and with what licensure.

SXSW indicates that it may still make exceptions for drones tethered to the ground and within special demo areas. You can take our drones, but you can’t break our spirit.

Photo via Bart Everson/Flickr (CC BY 2.0) | Remix by Max Fleishman