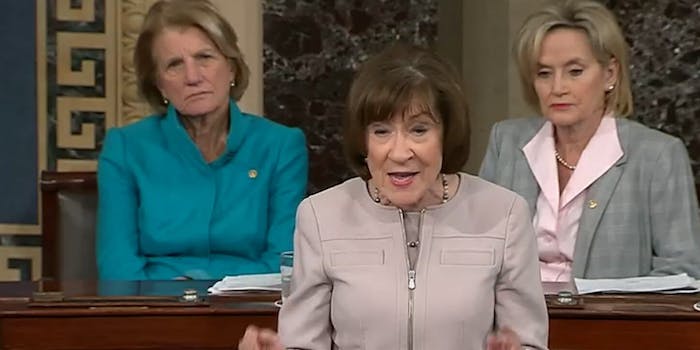 A lot of people weren't happy.

Sen. Susan Collins (R-Maine) said on Friday that she would vote for Supreme Court nominee Brett Kavanaugh, all but ensuring that he will be the next member of the Supreme Court.

With Collins’ decision to vote for Kavanaugh—who Dr. Christine Blasey Ford says sexually assaulted her when they were in high school—it ensures that Republicans will have the necessary votes to confirm him this weekend.

After Collins spoke Sen. Joe Manchin (D-W.V.) said he would vote for Kavanaugh as well.

Collins was seen as one of a few senators who could swing the vote. However, after Sen. Jeff Flake (R-Ariz.) and Sen. Lisa Murkowski (R-Alaska) made their decisions known, the votes of Collins and Manchin came under the microscope.

Before Collins’s speech, numerous protesters shouted for the senator to vote “no.”

After denouncing the process in which Kavanaugh’s nomination process unfolded, Collins made her decision known.

“I do not believe that these charges can fairly prevent Judge Kavanaugh from serving on the court,” she said.

She ended the speech by confirming that she would vote in favor of Kavanaugh.

The speech from Collins was not met well online.

Senator Susan Collins chose to be the enemy of all women. #SelloutSusan

Susan Collins deserves the Emmy for playing Aunt Lydia in this season of the Handmaid’s Tale pic.twitter.com/aJ1Sc07J7T

Susan Collins, stay where you are, Maine doesn’t want ya. #metoo #kavanaugh pic.twitter.com/UDeTd8aaBh

Moderate Republicans will not save you

She could have saved us all time and said, "These women are hysterical, I am voting yes"

Collins just did the "I believe a sexual assault survivor BUT" bit https://t.co/vUTOhhbJjZ

Others online complained that the senator took a while to announce her intentions. Her speech took over 40 minutes before she announced her decision.

susan collins's speech is longer than the FBI investigation into kavanaugh

The full Senate will vote on Kavanaugh tomorrow.