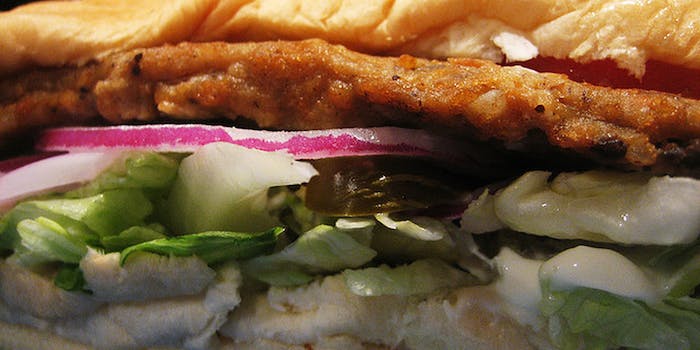 That $35 million Subway blackmail story is a sandwich of lies

We now have additional proof that the Internet is just a game of “Telephone” with 300 million players.

A disgruntled Subway franchisee tried to recoup business losses by threatening to release a YouTube video that repeated the fine print on the sandwich shops’ caloric menu, only to wind up accused of blackmailing the company for $35 million with an exposé that could ruin the brand.

In fact, as Vice reported in an interview with Arun Singhal, the Melbourne, Australia, man at the center of this confusion, the original figure was more like $350,000—the amount Signhal believed he was owed after he was asked to shut down his location, allegedly under false pretenses. Although Subway suggested that sales at the store were poor, Singhal contends that they were secretly retaliating for his complaints to higher-ups about the misleading nutritional promises of “six grams of fat or less” that allow the chain to market itself as health-conscious fast food.

“People are just unaware” of how much fat can be found in a Subway meal, Singhal said, but apparently all his video explains is that more fat can get smuggled into a sandwich via cheese or sauces, two things almost every customer orders. Subway’s own menu admits as much, albeit in small type: “Sandwich nutrition values include 9-Grain Wheat bread, lettuce, tomatoes, onions, green peppers and cucumbers. Values to not include cheese unless noted. … Addition of other condiments and fixings will alter nutrition values.” (Don’t forget salad dressing and croutons!)

Yes, it’s a bit of a loophole, though no worse than we expect from a dining establishment that serves cockroaches, warms wet employee socks in the ovens, and lies about the length of its “footlongs.”

Even so, the company was peeved enough to legally obstruct Singhal’s not-so-shocking video by arguing that it revealed “proprietary information.” According to Singhal, they calculated the potential damages at $35 million, then spun the story so it looked as though he had demanded that sum to keep quiet. Since talking to Vice, Singhal hasn’t answered his phone, and a Subway spokesman has yet to reply to our request for comment on the affair.

In conclusion: Don’t believe anything, ever. And maybe think about pizza for lunch?