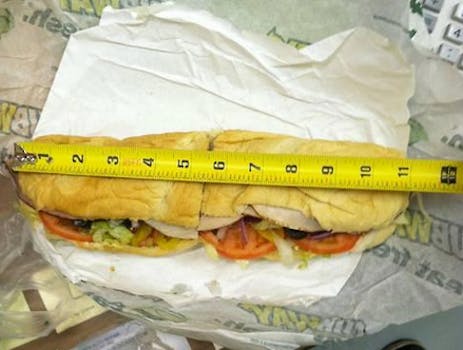 Worldwide sandwich shop Subway has responded to accusations that its Footlong sandwiches aren't actually one legitimate foot in length.

Worldwide sandwich shop Subway has responded to accusations that its Footlong sandwiches aren’t actually one legitimate foot in length.

Basically, the chain told the Australian accuser that it’s sorry it’s not sorry.

It was just on Tuesday that independently operating sandwich artiste Matthew Corby took to Facebook with a photograph of a Subway sandwich entrenched under an outstretched ruler measuring the sandwich at 11 inches. As we all know, there’s no room for slip-ups in the sandwich  making game, and Corby wanted answers. “subway pls respond,” he wrote.

The request for comment went hogwild ad infinitum upon its arrival on The Facebook, eventually getting picked up by The New York Post and a whole slew of other publications—this one included.

Friday, Subway responded to Corby’s complaints by posting a message onto his Facebook timeline. 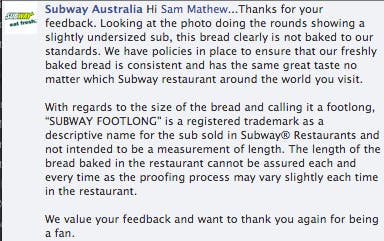 “Thanks for your feedback,” Subway Australia’s social media maven wrote. “Looking at the photo doing the rounds showing a slightly undersized sub, this bread clearly is not baked to our standards. We have policies in place to ensure that our freshly baked bread is consistent and has the same great taste no matter which Subway restaurant around the world you visit.”

That’s when the message broke into the tongues of technicality.

“With regards to the size of the bread and calling it a footlong, “SUBWAY FOOTLONG” is a registered trademark as a descriptive name of the sub sold in Subway Restaurants and not intended to be a measurement of length. The length of the bread baked in the restaurant cannot be assured each and every time as the proofing process may vary slightly each time in the restaurant.

“We value your feedback and want to thank you again for being a fan.”

All that attention and publicity and Subway doesn’t even bother throw him a free footlong. What a raw deal.

Subway did not respond to the Daily Dot’s request for comment. We’ll see if someone at the franchise around the corner will answer our questions as soon as we’re done with our workday.