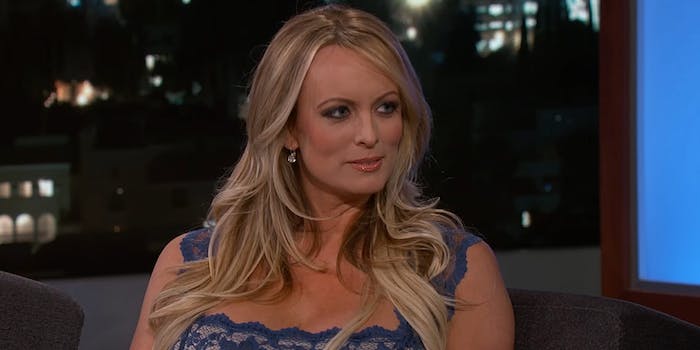 She made the remarks during an interview with 60 Minutes Australia.

Stormy Daniels, the adult-film actress who says she had an affair with President Donald Trump, says she now regrets comparing the president’s genitalia to a character in Mario Kart, adding that she believes it was “body shaming” him.

The adult film actress made the remarks during a lengthy interview with 60 Minutes Australia that aired on Sunday. When speaking with the news outlet, Daniels, whose real name is Stephanie Clifford, said she felt regret over describing Trump’s genitalia like “the mushroom character in Mario Kart” in her memoir Full Disclosure.

“I justify it in a way to myself, even now, saying ‘this is a man who said much worse things about women multiple times,’ so here’s a taste of your own medicine, asshole,” she said.

However, later in the interview, Daniels appeared to show remorse.

“I was very angry in writing that and now that the book is out and people are reading about it and it’s all over the internet, I actually feel pretty terrible about it,” she said. “In a way, it’s body shaming.”

The remarks, she said, were made in her book to prove that she wasn’t lying—a notion she touched on in the interview.

“If I was going to lie about having sex with someone famous—Brad Pitt, here we go,” she said. “I would pick somebody way less embarrassing than Donald Trump.”

The comparison to the Nintendo character predictably set the internet aflame last month, with many people claiming the description ruined the game for them.

Last week, Daniels joked about the remarks in her book on Jimmy Kimmel, when the host took out a large lineup of orange mushrooms and asked her to pick out the one that most resembled Trump’s genitalia.