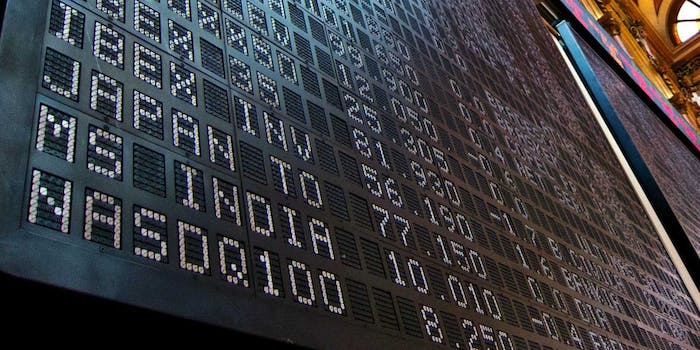 Are robots to blame for the stock market dive?

We entrust a shocking amount of our economic life to thoughtless software.

They’re learning to drive cars now, but robots have already been steering the stock market for years. This morning, they backed it into a wall.

The financial markets fell into mayhem on Monday, though it was a familiar mayhem. The flash crash of stock at 10:30 am ET normalized by roughly 1 pm, but these things don’t happen apropos of nothing. The behavior exhibited in the finance world today is but the latest in a series of similar indicators that fewer and fewer flesh-and-blood humans are making trades at times when trades really, really count.

Algorithmic high speed trading software permeates the fragmented stock marketplace, and as a result, the market “made moves this morning that it wouldn’t have otherwise,” said Sal Arnuk, partner and co-founder at Themis Trading. Software already buys and sells far more stock than any human investor, often at greater volume, much more quickly, and much more automatically.

We entrust a shocking amount of our economic well-being to unthinking software.

Because computer software is only ever following pre-written orders, it doesn’t handle freak, one-off incidents well, such as the one that seems to have caused this morning’s trouble: a veritable perfect storm of asset decline throughout the world last night, economic confidence in decline.

When greeted with such ominous, unlikely circumstances, software may make nonsensical trades that exacerbate the problem, and it may make hundreds of them a second. This effect on the market easily triggers other software traders into misguided action, quickly spiraling the situation out of control without so much as a human thought involved—we entrust a shocking amount of our economic well-being to unthinking software. It’s the stuff of Michael Lewis books.

When such technology works well, it’s capable of impressive feats; a financial intelligence platform called Selerity successfully beat Twitter to its own earnings report in April this year. But when they misfire, such rapid-fire computerized traders could potentially trigger a financial meltdown, caught in each other’s feedback loops.

“It’s not going to get better,” said Arnuk of the situation with respect to algorithmic trading software. His issue is with the fragmentation of the marketplace—that there’s more out there than just the NASDAQ. He suggests regulators might make the pool more diverse in order to offset the influence of potentially destructive trading patterns being carried out by software.

“High speed traders give us many advantages as well,” he continued, “but it will only get better in our opinion when you have stock exchanges representing retail orders, institutional orders, as well as high speed orders.”

Photo via Alberto Carrasco-Casado/Flickr (CC BY 2.0)