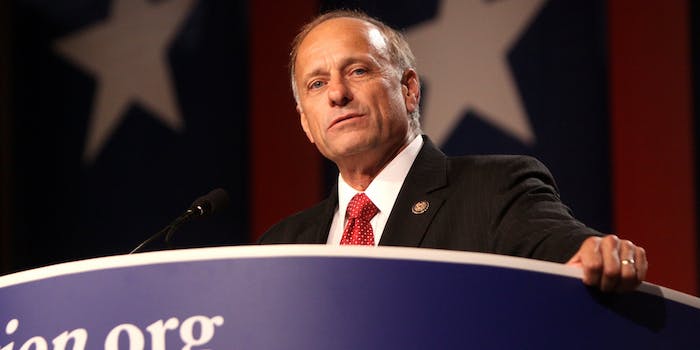 See if you can discern his sophisticated political message.

President Barack Obama is not Muslim. No, really, he’s not.

Despite what 34 percent of conservative Republicans believed in a July 2012 Pew poll, the president of the United States is Christian and by all accounts proud of his faith. Yet the president’s recent comments comparing Islam‘s influence on jihadism to Christianity‘s influence on the Crusades have reignited the debate over whether the president is one of Us or one of Them.

Never mind the fact that there are many Muslim Americans productively contributing to our society. The undercurrent of American conservative discourse on Islam is that it is a foreign entity, best known for its inherent and irresistible encouragement to commit violent acts (a compulsion that somehow eludes the overwhelming majority of the world’s 1.6 billion Muslims).

It is in this context that Rep. Steve King (R-Iowa), an anti-immigrant conservative who has dabbled in birtherism, tweeted a cartoon of President Obama wearing a turban.

An archived version of the tweet is available here, in the unlikely event that Rep. King deletes it.

Republicans reacted to Obama’s National Prayer Breakfast comments comparing jihadis to medieval crusaders with delirious outrage, seizing on the words as the latest supposed evidence that the president carried an un-American set of values. Cartoonist Glenn McCoy’s depiction of a turbaned Obama is only the latest example of conservative commentators deploying Muslim imagery as a dog-whistle to an Islamophobic base.

Unsurprisingly, the turban has long been a symbol of terrorism—and Obama’s support for it—among conservatives on Twitter.

Boehner's problem is that he isn't wearing a turban. Obama will believe anyone in a turban.

If Obama was any more terrorism-friendly he'd wear a turban.

Obama-put on your turban and pull out your prayer rug-you're not fooling us.

This was and IS America. Obama and his Muslim loving Administration can all go to hell in a turban! pic.twitter.com/2fUaYUKyZg