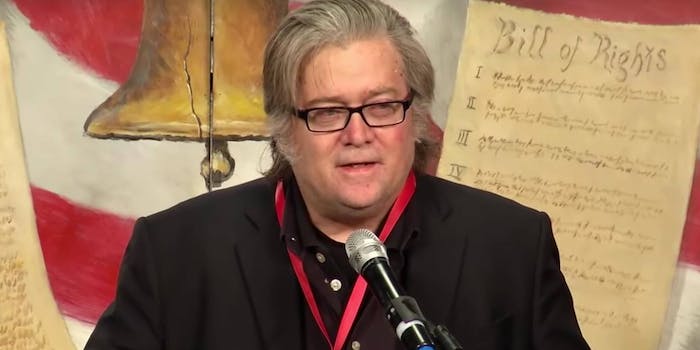 Screengrab via The Alt Right Media/YouTube

Donald Trump‘s calls for “voter fraud” investigations may have to start in the White House, as a chief strategist and senior counselor to the president is registered to vote in two states.

Steven Bannon, Trump’s former campaign executive and current adviser, is reportedly registered to vote in both New York and Florida. Being registered to vote in multiple states is legal, but opens the door for an individual to illegally cast multiple votes. Luckily, according to voter records, Bannon only voted in New York during the 2016 election.

Bannon served as a figurehead for the so-called alt-right movement— home to many white nationalists, neo-Nazis, racists, and misogynists—through far-right publication, Breitbart News, where he was previously executive chair. Bannon stepped down from the publication when the Trump presidential campaign brought him on.

Last year Bannon faced scrutiny when the Guardian reported he was registered to vote at the address of his vacant house in Florida. Soon after, Bannon changed his registration to a friend’s house in Sarasota County, Florida, where he is still currently registered.

Trump recently condemned supposed instances of voter fraud, including being registered in multiple states, and called for an investigation on the recent election. Though details are unclear, he promises to “strengthen up voting procedures” if instances of fraud are found.

I will be asking for a major investigation into VOTER FRAUD, including those registered to vote in two states, those who are illegal and….

even, those registered to vote who are dead (and many for a long time). Depending on results, we will strengthen up voting procedures!

A well-known part of the Trump campaign was the idea of a “rigged” election, claiming millions of illegal votes were stacked in favor of his opponent, Hillary Clinton. This fear of an unfair election led both a Texas voter and an Indiana voter to cast two votes each for Trump. U.S. intelligence briefs have also suggested Vladimir Putin may have had a hand in the election results.