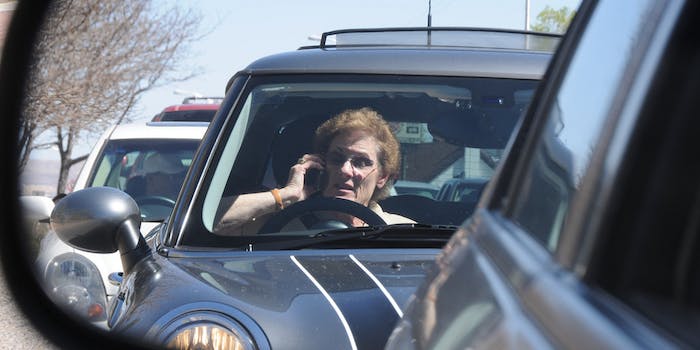 Whatever you do, don't answer that text in Alaska.

The federal system of power in the United States often leads to seriously inconsistent results. Case in point: Laws regulating texting and calling while driving.

Although there are some broad trends (almost all states ban texting while driving), there are also areas of the country where the law shifts across borders. A few states have unique prohibitions that make you wonder what gave rise to them.

To untangle the mess of distracted-driving rules, we reviewed the laws of all fifty states plus Washington, D.C. to see how laws differed across states and regions.

Our main resource was the Governors Highway Safety Association’s Distracted Driving Laws page. Some of the bans on calling and texting from behind the wheel are “primary enforcement laws,” which means that officers can cite drivers solely for violating them. Officers can only cite people for violations of “secondary enforcement laws” if the driver has committed another offense.

Here is a map of state laws to familiarize you with the lay of the land. Note: All bans are authorized by primary enforcement laws unless otherwise noted.

As you can see, the American distracted-driving legal apparatus is a veritable patchwork of regulations. Things are mostly uniform when it comes to texting while driving, which is fully banned in all but five states. Arizona and Montana have no ban on texting whatsoever, while Mississippi, Missouri, and Oklahoma have limited bans. The most surprising thing we learned when it came to texting bans was that one state goes above and beyond when it comes to punishments. You will be fined $10,000 if you are caught texting while driving in…

That’s right. One of the most conservative states has by far the most onerous punishment for texting while driving.

In general, however, the political ideology of a state was a fairly good predictor of how that state regulated talking on the phone while driving. We classified each state’s calling-while-driving laws as either strong or weak. “Strong” means at least a complete ban on hand-held calling. “Weak” means anything less than that. I also classified each state’s political ideology based on the results of the 2012 presidential election. States voting for Obama were labeled “Liberal” and states voting for Romney were labeled “Conservative.”

A note on ideological classification: In some states, like Florida, the popular vote margins were so slim as to raise doubts about the fundamental ideology of the state. I understand that not every state’s political climate can be fully captured by the results of one presidential election. This is only a rough approximation.

Sixteen states had strong laws against calling while driving. The other 35 had weak laws against the practice. This is a split of approximately one-third versus two-thirds.

Of the 35 states with weak laws, 22 of them (66 percent) were conservative. Fifteen of these 22 states only banned calling while driving for people under the age of 18 and school bus drivers. In a few cases, the bans for minors fell under secondary enforcement laws. As mentioned above, these laws prevent an officer from citing a teenager on his or her permanent record solely for this offense.

It’s worth noting that state-level legislation is not the only source of driving regulations. Cities can implement their own bans on calling and texting while driving. Bozeman, Mont., resident Kenny Baese noted that his city instituted its own ban on both practices (with an exception for hands-free devices), punishable by a $100 fine. Baese speculated that the presence of Montana State University in the city could have contributed to the local government’s action. At the state level, Montana is one of two states that has no restrictions whatsoever on either calling or texting while driving. The other state is Arizona.

State-level laws range from the simple (Montana’s and Arizona’s free-for-alls) to the highly specific. Texas, for example, bans calling while driving if the driver has a passenger who is 17 or younger (Calling is also banned for all drivers who are under the age of 18.) .  You’ll have to take a Texas defensive driving course or pay a fine if you are pulled over regardless of your age.  Arkansas bans hand-held calling for drivers who are between 18 and 20 years of age, and a secondary enforcement law bans all calling by drivers under 18.  More state level rules can be found on this helpful driving guide.

New Mexico has our favorite regulation. It bans hand-held calling in state vehicles only. (There is a full ban for drivers with a Learner or Provisional License.) If you’re an employee of the New Mexico state government and you want to talk on your phone while driving, take Interstate 40 west into Arizona, where you can talk and drive all you want—as long as you’re not a school bus driver. You could also take Interstate 25 north into Colorado, where everyone except minors can talk and drive. (Disclaimer: The Daily Dot does not endorse this dangerous behavior.)

Reviewing these wildly different laws, it’s almost enough to make you wish for consistent, national distracted-driving legislation. Then you remember that it would involve Congress, which should make any sane person slam on the brakes.