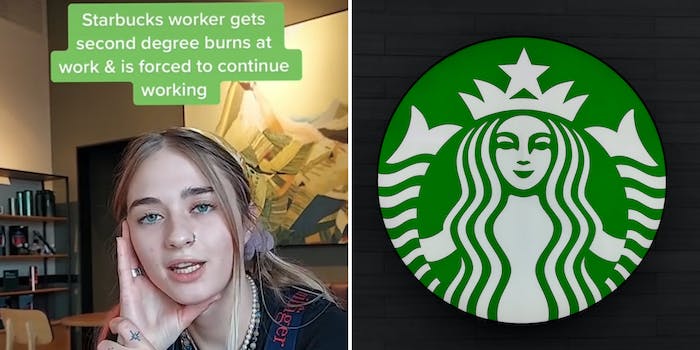 ‘I had to return to work right away’: Starbucks worker says she had to continue working after getting 2nd-degree burns on the job

A woman claims she suffered second-degree burns while working at Starbucks. In the days following, Julia says she was “denied time off, compensation to properly recover, and any support from management,” according to her GoFundMe.

The GoFundMe also theorized that the treatment Julia allegedly received may stem from her work attempting to unionize her Starbucks location in Buffalo, New York.

The video, posted by SBWorkersUnited (@sbworkersunited, an account dedicated to organizing Starbucks partners for unionization), currently has over 63,000 views.

In the video, Julia says she accidentally spilled hot water on her foot while cleaning before closing. She says she was wearing protective shoes, yet she still sustained second-degree burns on her toes and the side of her left foot.

Despite being able to call off the day before, Julia says she had to return to work “right away.” She also says she made an incident report, but this allegedly did not result in compensation or a reply from her manager via phone call or text message.

“I have not seen her since, or have heard [from] her since it happened,” Julia says. “It is now Monday, the next week, and I’m still at work, and I still have worked, and my foot has worsened from being at work.”

“I just need some help, because I have no sick time available left to use, and they’re forcing me, basically, to work with the condition I’m in. And I can’t even put shoes on.”

In comments, TikTokers supported Julia and criticized Starbucks’ alleged treatment of her.

“That is a workers comp case,” one user claimed. “They are responsible for covering treatment.”

“Incident report is a different thing. your manager should help you make a workers comp case,” another agreed. “That’s just a bad manager.”

Other alleged current and former Starbucks employees chimed in to share similar stories to Julia’s.

“Got 2nd degree with a grilled cheese and never got anything for it and had to work still,” a user alleged.

“Had the entire front panel off the ice bin come off and fall on my head and got nothing,” a second claimed.

“I also got second degree burns on my hand,” a third said. “Workers comp didn’t give anything to me and completely guilt tripped me the entire time.”

“You know that oil from the crispy grilled cheese after warming it? yeah… i almost burned alive. and couldn’t go home early,” a fourth shared.

Julia has set up a GoFundMe following the incident to cover lost wages.