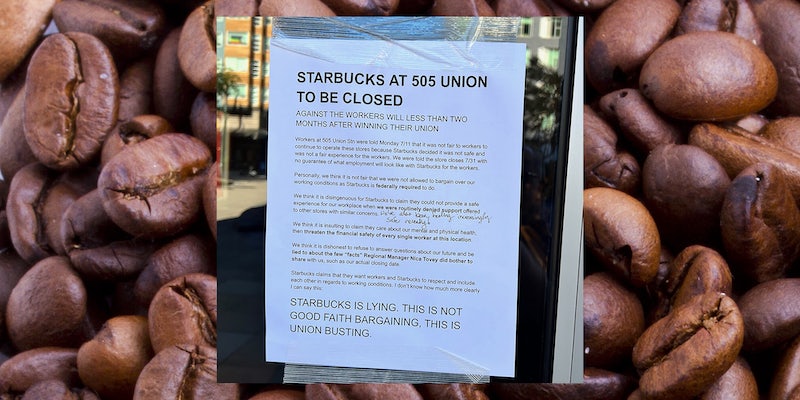 'They will stop at nothing to bust the union'

Workers at a Starbucks in Seattle are criticizing the company’s move to close their store and calling it, according to a viral tweet, “union busting.”

Starbucks announced Tuesday it would close the store, located at 505 Union Station in Seattle, along with 15 others, citing safety concerns. But some on Twitter have criticized the move, noting that at least three of the 16 stores have voted or petitioned to unionize.

The stores Starbucks is set to close, according to the Wall Street Journal, include six in Seattle, six in Los Angeles, and two in Portland.

“So let me get this straight: Starbucks is closing EIGHT stores in the PNW, citing ‘crime’ as the reasoning,” one user wrote. “When in actuality, they’re union-busting by shutting down POC and queer-centric locations that are pro-union? I hope Howard likes subpoenas!”

In a video of an alleged internal meeting on Wednesday, which the Daily Dot was unable to independently confirm, CEO Howard Schultz said the closures were necessary after the company heard from workers about safety concerns.

“We’re listening to our people and closing stores, and this is just the beginning,” Schultz said in the video. “There are going to be many more.”

The Wall Street Journal said that Starbucks was concerned about drug use in the stores by customers and the public.

“We cannot serve as partners if we don’t first feel safe at work,” Starbucks reportedly wrote in their announcement. They pledged to relocate the affected store workers to other, still open locations.

But the workers in Seattle posted a sign on the door of their store, saying the closure is “against the workers will” and “not good faith bargaining.”

They noted in the letter that they’d even felt safer in the store in recent months. A worker at the store, who the Daily Dot is not identifying, also tweeted about the closure and called out Starbucks’ behavior.

“Personally, we think it is not fair that we are not allowed to bargain over our working conditions as Starbucks is federally required to do,” the letter said. “We think it is disingenuous for Starbucks to claim they could not provide a safe experience for our workplace when we were routinely denied support offered to other stores with similar concerns.”

A separate Twitter user confirmed the letter was posted to the front door of the Starbucks at Union Station yesterday.

In a statement, Starbucks Workers United—which represents the unionized Starbucks stores—said the closures prove the company thinks they are “above the law.”

“Every decision Starbucks makes must be viewed through the lens of the company’s unprecedented, and virulent union-busting campaign,” the union said.

The union says the closing of a popular store in Ithaca, New York came after a protest over unsafe condition.

“Starbucks’ response was not to fix the problem but to punish the workers who had recently unionized,” the statement said. “Yet, Starbucks still argues that this was not a response to the growing union movement spreading across the country”

The union also pointed out that Starbucks has been hit with hundreds of National Labor Review Board complaints over the past couple of months.

“They will stop at nothing to bust the union,” the union said. “This is a clear way to punish those workers who voted ‘yes’ to unionize and intimidate workers from organizing.”

Starbucks did not immediately respond to a request for comment.