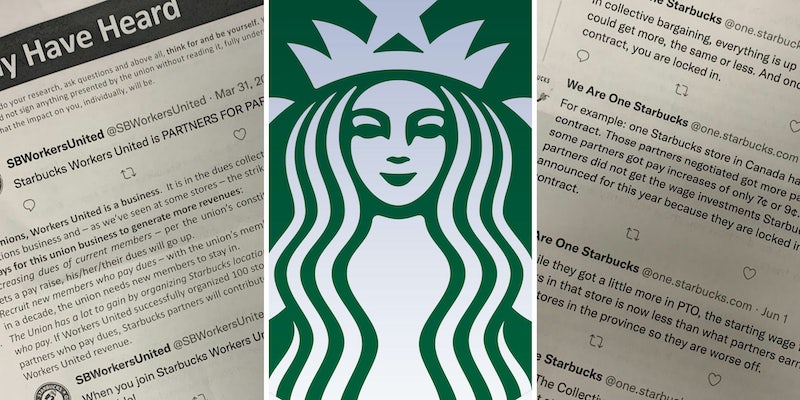 'Starbucks has new anti-union flyers up in stores with fake tweets.'

The Starbucks Workers United union is alleging that Starbucks used fake tweets from the union account in new anti-union pamphlets, according to a tweet.

“Starbucks has new anti-union flyers up in stores with fake tweets from our account—things we’ve never posted,” the tweet reads. “Here’s how a keen eye can spot the difference: our tweets are way less boring and get a lot more likes and RTs.”

In the flyers, the company encourages employees to “think for and be” themselves and to “not sign anything presented by the union without reading it, fully understanding it and being fully informed as to what the impact on you, individually, will be.” The flyer also emphasizes that former employees and out-of-state employees are on the bargaining committee for the Elmwood Ave Starbucks, the store in Buffalo, New York, that kicked off a wave of union votes after voting to unionize in December.

The tweet comes on the same day that a store in Pittsburgh voted unanimously to unionize, becoming the 19th store nationwide to unionize.

The flyers also come on the heels of several Starbucks union organizers being fired, which the union believes to be retaliatory action by the company. The firings have all occurred in the weeks since Howard Schultz, former and now interim CEO, resumed control of the company and made his anti-union stance quite clear.

The Daily Dot has reached out to the union and to Starbucks for comment.