For some people, this may be a good thing.

Star Wars fans can now download an add-on for Google Chrome that will block spoilers related to Star Wars: The Force Awakens, set to be released next month.

Developed by software company Jitbit, the Chrome extension “Star Wars Spoiler Blocker” is designed to blur any page that contains Star Wars spoilers. Trouble is, the extension seems to be doing an overly aggressive job of detecting potential Star Wars “spoilers,” blurring practically any mention of the film all together.

One user complained that Star Wars Spoiler Blocker flagged his e-mail and his shopping list as spoilers, giving the extension a two-star rating. Another user wrote that the extension “needs a bit of work”, instead of just putting up a warning any time it detects any mention of Star Wars VII. “Good that you can turn it off though,” the user (who gave it four stars) added.

Fortunately, this “bug” in the extension may actually be a godsend for legions of Star Wars fans whose workplace productivity have taken a nosedive in recent months as they’ve devoured multiple analyses of the trailer and movie poster for The Force Awakens. If you’re a Star Wars die-hard who types out “theforce.net” by habit every time you open a new browser window, downloading a tool that will forcibly blur any mention of Star Wars: The Force Awakens from the Internet could give you back the hours you’ve lost to Googling fan theories until the crack of dawn. 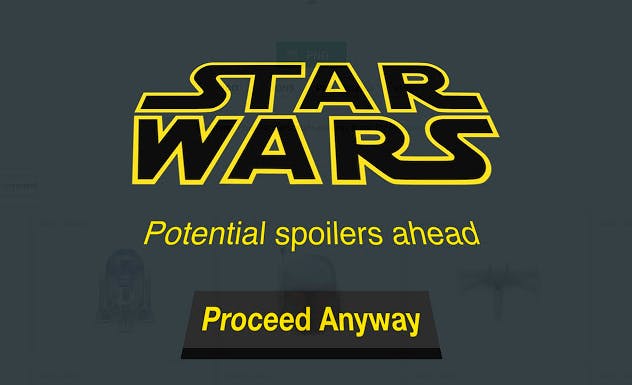 Best of all, Chrome’s Star Wars Blocker ahem Star Wars Spoiler Blocker lacks the option to whitelist sites. Meaning, there’s no cheating; Star Wars fans who have downloaded the extension must navigate an Internet virtually free of any mention of Knights of Ren or Mark Hamill, do or die. So far, nearly 8,000 Star Wars die-hards have risen to the challenge. Will you?