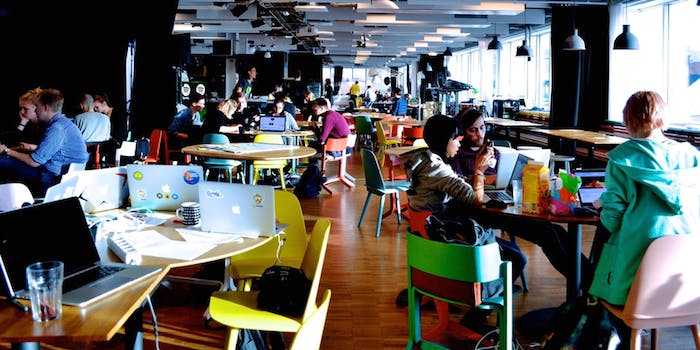 How Spotify achieved gender parity at its ‘Diversify’ hackathon

The company made inclusion a focus, and it paid off.

I’ve been to, and even hosted, multiple hackathons. For women, these events can often be intimidating, and there are always more men than women who attend. Like many other industry events, such experiences can be off-putting, leading to people foregoing them altogether.

The argument that there simply aren’t as many women as men interested in attending hackathons is quite flawed. The fact is, hackathon culture plays a large part in deterring talented, curious women who don’t want to be coding ninjas for 48 hours while listening to head-splitting techno music, having their skills questioned by peers in competitive environments.

Spotify is proof of this. The music company set out to achieve gender parity at its most recent hackathon dubbed “Diversify,” and discovered that by making slight changes to the way it distributes event invitations, presents ideas, arranges teams, and focuses on inclusion, companies can successfully welcome 50 percent men and 50 percent women at events that are traditionally male-dominated.

In a blog post, Sofie Lindblom, design operations at Spotify, described a number of focused efforts that ultimately led to the most diverse hackathon the company has hosted. Prior to this event, Lindblom said the company rarely had better than a 15:85 women to men ratio.

“There is not a high enough demand from women to attend tech events.”

Believe it or not, we still get versions of this from a lot of people as an explanation for why there are so few women at tech events. We simply refuse to believe this is true. So instead we set out to create a tech event that would be equally attractive to men and women.

The company looked at research from a number of organizations including the National Center for Women and Information Technology and Stanford University to understand both why it’s important to have diverse teams, and why women tend to shy away from competitive events, which hackathons usually are.

A 2009 investigation into hundreds of companies revealed that diversity impacted the bottom line—more diverse teams generated more profit, customers, and greater market share. And one analysis of thousands of corporations showed that companies with women in board and leadership positions out-performed companies with all-male boards.

So it’s obvious that diversity leads to company success—and because companies grow out of events like the one Spotify hosted, creating diverse teams was important to the event.

“We were frustrated about the fact that we didn’t manage to accomplish even close to a balanced mix at our previous hackathons,” Lindblom said in an interview with the Daily Dot. “As an experiment, we wanted to see how the atmosphere would be if we achieved a 50-50 female-male ratio, none of us had ever experienced that at a tech event before. It was important that we dared to try, because in the end we believe that diverse teams create better products.”

Before the hackathon kicked off, Spotify focused on attracting women to participate. The marketing materials featured gender-neutral colors, and Lindblom said the company steered away from “ninja” or “Barbie” marketing. Instead of promoting the event to the regular “Facebook hacker groups,” Spotify reached out to universities, friends, and the local community to spread the word organically, to people who might otherwise not have heard about it.

For most technical events like this, the host asks for a GitHub account, possibly a personal website, and little else. Spotify instead asked applicants personal questions, like why diversity is important to them. And the company didn’t assume everyone knew how to use GitHub already, and provided Git tutorials before the event began.

Spotify accepted 40 applicants, broken up into 10 teams, two men and two women on each team. Although gender parity might seem a bit skewed thanks to Spotify selecting attendees from a huge pool of applicants, the company said that applications themselves were relatively balanced as well: Spotify received 57 percent male applicants, and 43 percent female. Not perfectly equitable, but much better than the previous ratios.

At the event itself, healthy food was served, along with “traditional” hackathon snacks like chips and energy drinks. The company also had a diverse group of speakers and presentations at the hackathon, and instead of the traditional pitch session that puts teams under pressure to compete and explain their product in 90 seconds, Spotify hosted an open house for judges to wander from booth to booth, meeting teams individually.

“Gender is only a subset of diversity. It’s also about nationality, age, religion and much more,” Lindblom said. “We addressed gender as a first step, but will keep working towards making our events welcoming for everyone, regardless.”

What Spotify discovered by using “Diversify” as at theme for this particular event, is that by focusing on welcoming more women, more applicants from a variety of diverse backgrounds applied.

Attendees appreciated the efforts. According to Spotify, people said it was less stressful, more engaging, and a better experience than others they’ve been to.

Such equality likely wouldn’t have been achieved if initial promotional efforts didn’t focus on “Diversify.” It takes mindful, targeted efforts to create such an environment, and Lindblom recognizes that in order for Spotify to continue to have inclusive events, appealing to diverse groups should be imperative.

“It’s one of the reasons we decided to go through with Diversify in the first place, the frustration to not reach a diverse crowd to our events,” Lindblom said. “I wouldn’t say the outcome of Diversify was purely due to marketing though, it’s about being thoughtful in every part of the execution.”

Focusing on gender parity was just the first step for Spotify, Lindblom said. In the future, the company is going to continue to work on making the events appealing to everyone.