This was probably not Spotify's best move.

In its continued effort to drive a wedge between its customers and competitor Apple, Spotify has launched an attack directed at its subscribers’ inboxes. A new wave of emails from the company explains how Apple is responsible for the higher subscription prices for those customers who have subscribed to Spotify via the App Store.

Like many other subscription based apps, Spotify has included the ability to subscribe to its service directly from the Spotify iOS app. It’s a convenient option, but it’s also significantly more expensive thanks to Apple’s 30% cut of all App Store and iTunes transactions. Apple’s share adds three dollars to the standard Spotify Premium price of $9.99, putting it at $12.99 and making it appear a good deal more expensive than Apple’s new music service, also priced at $9.99. 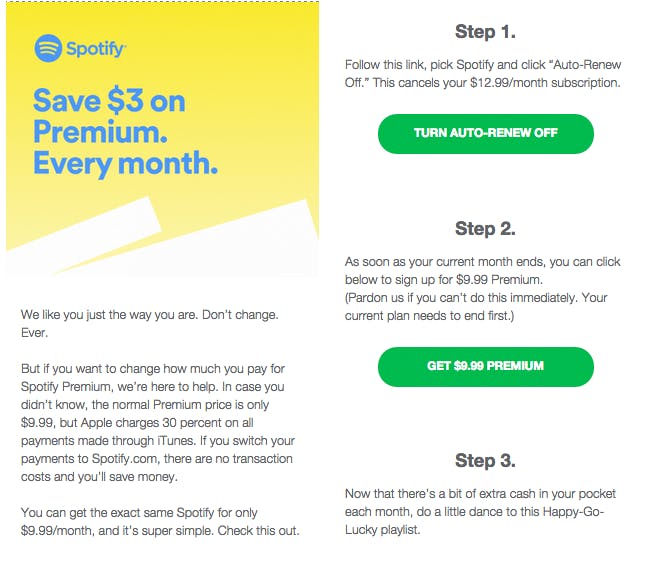 Spotify via The Verge

The new email alert explains how Apple’s cut is responsible for the increased prices, and explains in great detail how to turn off Spotify Premium auto-renewal and then re-subscribe via the Spotify website for the lower price.

If Spotify’s plan works as intended, subscribers will simply make the transition to the lower price by canceling the more expensive App Store subscription and re-subscribing directly, but it might not have been the best way to go about it.

In the email, Spotify explains that in order for a customer to subscribe directly and receive the service at a lower cost, they have to cancel their auto-renewal and then wait for their membership to lapse before renewing their membership. In essence, Spotify is giving a huge chunk of its customers directions on how to cancel their service and then praying that they take the time to actually sign up directly once their premium tier of music shuts off.

Apple’s App Store rules prevent the company from actively promoting the cheaper price via the Spotify app itself, which also means pushing a gentle reminder to users once their service expires is also likely off the table.

A doomsday scenario for Spotify looks a bit like this:

A premium subscriber sees the email bomb and turns off auto-renewal as instructed. Some time down the road—it could be tomorrow, or it could be three weeks from now—that person taps their Spotify app only to realize that their premium service has lapsed. Not wanting to sign up via the App Store again at $12.99, but wanting on-demand music immediately, they decide to try Apple Music—which, by the way, is currently free for three full months—and they never look back.

It’s not hard to imagine this happening to lots and lots of Spotify Premium members. Loyalty in the music market, particularly in streaming, is extremely thin and convenience trumps everything else. Requiring customers to cancel, wait, and then resubscribe somewhere else is anything but convenient, and when Apple Music is already installed and ready to go on every iPhone running iOS 8.4, it’s a chore that could cost Spotify dearly.