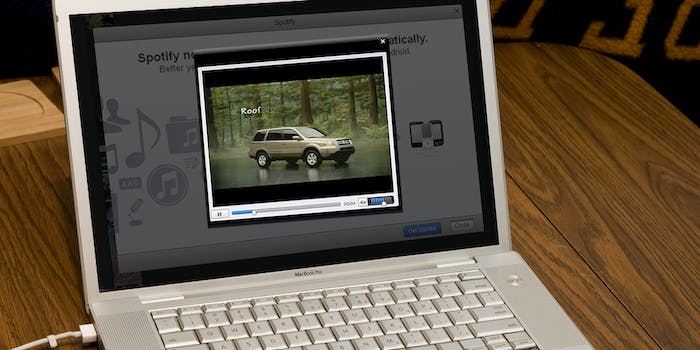 You’ll soon have to deal with video ads on Spotify

As if the regular ads weren’t annoying enough.

Having already conquered your ears, Spotify is preparing to sell your eyeballs to the highest bidder: Video ads are coming to the service later this year. In exchange for a single video ad, listeners will get a full 30 minutes of music without any additional commercial interruption.

Some of the world’s biggest advertisers—Coca-Cola, Ford, McDonald’s, and Universal Pictures included—are already on board, Ad Age reports.

Video ads, a $6 billion industry according to eMarketer, are far more lucrative than the audio spots the startup already runs.

If you decline to watch a video ad, you can continue with the normal audio ads. And if you pay $9.99 a month for Spotify premium like a reported 30 million users do, you can skip the ads entirely.