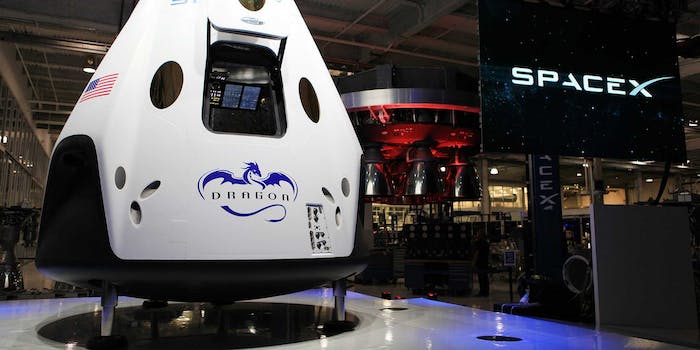 You can now do whatever you want with SpaceX’s photos

It turns out Twitter can effect change in the world after all, as long as you send your tweets to the right person. It took just a single tweet (and a couple dozen retweets and favorites) to catch the attention of Elon Musk and prompt him to release SpaceX photos to the public domain.

The photos, published to Flickr by SpaceX last week, were initially uploaded under the Creative Commons license. This label gives the public access to the photos and permission to download and use the images provided they gave proper attribution. But the people demanded more.

Twitter user Pandoomic questioned Musk as to why he didn’t just make the photos public domain.

@elonmusk Why not just public domain? What is there to lose?

Musk, upon seeing the friendly prodding to go further, replied back less than an hour later to say he had done as requested: SpaceX photos would become public domain.

Now that the photos are completely up for grabs, they can be remixed without restriction. It’s an adjustment that makes sense coming from Musk, the man behind the car company that made all its patents open source.

Elon Musk may be some sort of mad scientist/Bond villain, but he reads his Twitter mentions just like the rest of us.