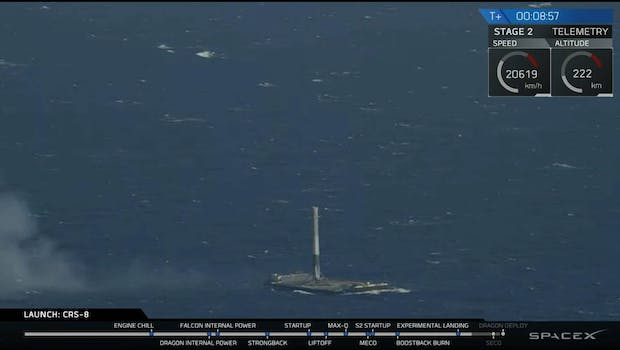 SpaceX just successfully landed a rocket on a ship

It only took five tries.

On Friday afternoon, SpaceX finally accomplished a goal it has been working on for some time now. The private aerospace manufacturer managed to successfully land its Falcon 9 rocket on a drone ship at sea.

The landing marks the first success in the company’s ongoing quest to place its reusable rocket on an ocean-bound platform; its four previous attempts had all failed. Friday’s event is a massive breakthrough for SpaceX, which has now landed rockets both on land and at sea. The eventual goal is that these landed rockets may be able to be reused for later missions.

The 1st stage of the Falcon 9 just landed on our Of Course I Still Love You droneship. Dragon in good orbit pic.twitter.com/SYyUCDZE3k

Liftoff on the Falcon 9-propelled Dragon cargo ship, which was set to take 7,000 pounds of cargo and an inflatable room to the International Space Station, took place at 4:43pm ET from Cape Canaveral, Florida. Just nine minutes later, at 4:52pm ET, the first stage rocket successfully touched down on a drone ship named Of Course I Still Love You, which was prepared to catch the rocket in the Atlantic ocean.

SpaceX reported that the Dragon ship remained on nominal trajectory and is set to reach the ISS by Sunday morning.

The historic moment was caught on SpaceX’s live webcast, which showed the landing and celebratory footage from the mission control headquarters, where crew members began chanting “U-S-A!”

The landing at sea had previously alluded SpaceX, but sticking the landing is of massive importance for the company. SpaceX Vice President of Mission Assurance Hans Koenigsmann said at a recent NASA press conference that next few flights will require drone ship landings, and about two-thirds of all landings made by the company’s rockets will happen at sea.

That’s what SpaceX just did.

NASA offered its congratulations to SpaceX and company founder Elon Musk on Twitter, stating, “Way to stick the landing.”

Congrats to the @SpaceX team & @ElonMusk! Way to stick the landing & send #Dragon to @Space_Station. https://t.co/TCJCQljJBZ

Blue Origin, the rival aerospace company owned by Amazon founder Jeff Bezos, has remained silent on the news of the Falcon 9 landing. Blue Origin beat SpaceX to its goal of landing a reusable rocket, and the companies generally like to throw shade at one another to minimize the successes of the competition. But this occurrence may be hard to spin: It’s clearly a major accomplishment for SpaceX.