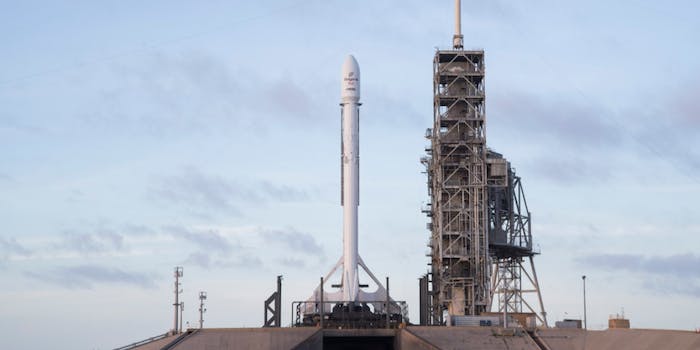 Iridium targeted for 6/25—could be a weekend doubleheader

The first flight launched from Kennedy Space Center in Cape Canaveral, Florida carrying BulgariaSat-1, the first Bulgarian communications satellite ever sent to space. While the launch was textbook, conditions for landing the reusable rocket had CEO Elon Musk on edge. He even warned there’d be a “good chance rocket booster doesn’t make it back” because it would be subjected to more heat and force during reentry than any previous rocket.

Falcon 9 will experience its highest ever reentry force and heat in today's launch. Good chance rocket booster doesn't make it back.

But even those harsh conditions didn’t keep it from sticking the landing on SpaceX’s autonomous drone ship “Of Course I Still Love You.” The Falcon 9, which had sent 10 rockets up to space in January, was forced to use “almost all of the emergency crush core,” a component used to soften its landing.

This was the second-ever successful landing of a used rocket.

Phase two of the weekend doubleheader launched from Vandenberg Air Force Base in California on Sunday. It delivered the second payload of 10 satellites into orbit for Iridium, a communications company. SpaceX has now delivered a total of 20 in a series of 75 satellites designed by Iridium to increase wireless speeds, improve aircraft tracking, and make it so anyone on Earth can contact anyone else from anywhere else.

Elon Musk again prefaced the landing attempt with caution. He explained the autonomous drone ship floating in the Pacific Ocean, called “Just Read the Instructions,” had to be re-positioned because of extreme weather.

Launch at 1:25 delivering 10 satellites for Iridium. Droneship repositioned due to extreme weather. Will be tight. https://t.co/6ZcSG29B74

But again, the Falcon 9 softly floated down to its landing platform.

Sunday’s launch was the first rocket equipped with SpaceX’s new titanium hypersonic grid fins, which are used to steer the rocket as it reenters the atmosphere. The new materials, which replaced shielded aluminum, can be reused without refurbishment. This should save SpaceX millions of dollars and reduce the time between launches.

Closeup of the titanium grid fins. Not painted, as they glow red hot during a fast reentry. pic.twitter.com/Ltrq1Prg2m

The Falcon 9 carrying Iridium satellites was the company’s 13th successful landing, and ninth launch this year. It has already launched more rockets in 2017 than any other year.