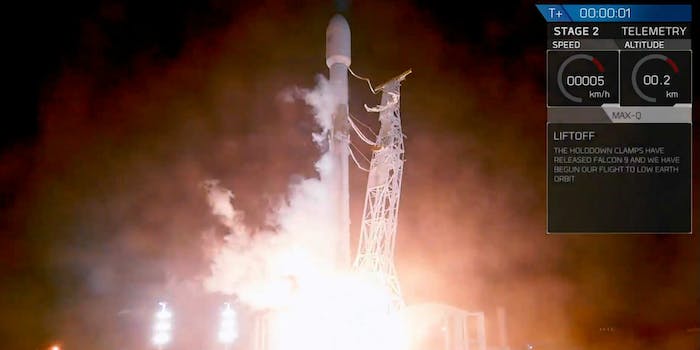 The broadband service is scheduled for completion in 2024.

SpaceX’s PAZ mission was a success, kicking off a project that could one day provide low-cost internet to millions of people worldwide.

The aerospace company launched a 3,000-pound radar satellite and two smaller test satellites into orbit using a Falcon 9 rocket earlier today. The launch, located at Vandenberg Air Force Base in California, was originally set for Wednesday but was postponed due to high wind speeds.

You can watch a replay of the launch here:

SpaceX has already sent dozens of satellites into orbit over the past few years, but its latest launch may be the most significant yet. The primary cargo is a satellite called PAZ (Spanish for peace), which will spend the next five years carrying out radar and imaging for the Spanish government. The massive satellite contains advanced radar instruments designed to capture imagery for the Spanish military and third-party clients. PAZ will orbit Earth 15 times per day, taking 100 high-res images that cover 300,000 square kilometers every 24 hours.

PAZ may be the primary payload, but it’s the two smaller satellites—Microsat 2a and 2b—we’ll hear more about in the future. Part of a project called Starlink, these test satellites will be the first two pieces in a planned array of 12,000 satellites designed to beam low-cost broadband internet down to Earth. The goal is to cover large parts of Earth with reliable low-latency internet so people in rural and low-income areas can stay connected. If successful, SpaceX will plant 7,500 satellites at 200 miles above the Earth’s surface and 4,400 more at 700 miles by 2024.

SpaceX still has to work out finances and other technical details, but the Starlink project could be a boom to Elon Musk’s ambitious goals. Projections gathered by the Wall Street Journal in 2017 show SpaceX expects more than 40 million people to subscribe to the internet service, amounting to $40 billion in revenue a year. Like the recently debuted Falcon Heavy, the revenue earned from Starlink could go toward funding the colonization of Mars.

An older Falcon 9 model, the recycled PAZ rocket will not be reused. However, prior to launch, Musk said he wanted to catch the fairing, or nosecone, on a platform ship called “Mr. Steven” in the Pacific Ocean. The vessel is essentially a landing platform with a “giant catcher’s mitt” strung to its roof.

“Going to try to catch the giant fairing (nosecone) of Falcon 9 as it falls back from space at about eight times the speed of sound,” Musk wrote in a tweet. “It has onboard thrusters and a guidance system to bring it through the atmosphere intact then releases a parafoil and our ship, named Mr. Steven, with basically a giant catcher’s mitt welded on, tries to catch it.”

Missed by a few hundred meters, but fairing landed intact in water. Should be able catch it with slightly bigger chutes to slow down descent.

Unfortunately, Mr. Stevens needs a bit more catching practice. Musk admitted shortly after launch that the ship failed to catch the Falcon 9 cone by “a few hundred meters.” He is confident a larger parachute will solve any problems for future attempts. If SpaceX can work out the kinks, it could save up to $6 million per fairing.