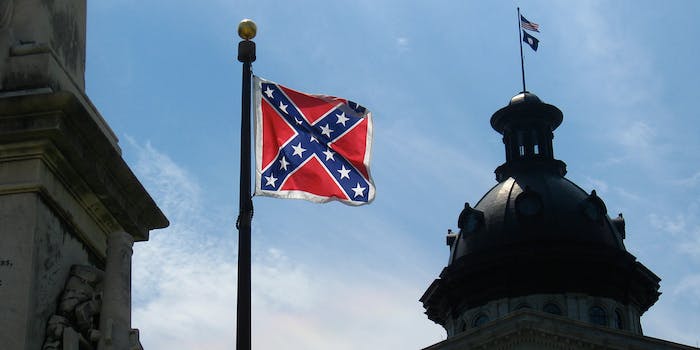 Americans are collectively calling for South Carolina to take down the Confederate flag at the State House in the wake of the Charleston church shooting.

The flag, which remains a racially divisive symbol in South Carolina, has been displayed at a monument to the state’s Confederate soldiers on the north side of the State House for 15 years. It previously flew atop the building’s dome. The relocation was part of a compromise in 2000 that led to the passage of the Heritage Act, a law that protects recognized war memorials bearing the Confederate flag, among other types of monuments.

U.S. and state flags at half staff at State House, but Confederate flag not lowered. pic.twitter.com/ydQnVrREKy

In the 1950s, the battle flag was revived not just as a symbol of resistance to federally mandated desegregation.

The stars and bars was also a symbol of terror: of the violent intimidation of African Americans who dared assert their rights.

In February 2000, then-South Carolina congressman Lindsey Graham—now a U.S. Senator running for president—told the New York Times that he understands why African-Americans despise the flag, but he also sees why others want to keep it around.

”There is a guy out there named Bubba. He grew up when public schools got integrated. He goes to work every day. There are women and African-Americans in the workplace and he’s fine with that, but he thinks the whole world is against him and has rights he doesn’t have. He thinks the flag is the last thing he has going for him and he’s not going to take it down. I don’t want to step on Bubba’s feelings. There are no groups sticking up for the Bubbas of the world.”

There's something absurd about seeing the Confederate Flag flying at half mast the day after a mass shooting at historic black church.

Nine people, including three pastors, a librarian, and a legislator, were gunned down Wednesday evening at the Emanuel African Methodist Episcopal Church (AME). Reverend Clementa Pickney, 41, a South Carolina statesman and civil rights leader, was among the deceased. Officials said the ages of the victims ranged from age 26 to 87.

Police arrested 21-year-old Dylann Storm Roof for the shooting on Thursday afternoon. He had been captured on a surveillance camera entering the church roughly an hour before the shooting began. He was later arrested about 250 miles away in Shelby, North Carolina. Both federal and local authorities have labelled the shooting a hate crime.