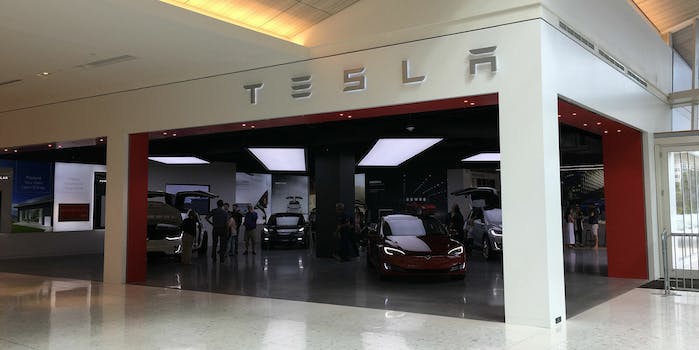 Powerwalls will be installed in 50,000 homes in the next 4 years.

Instead of the industrial-grade Powerpack batteries used for South Australia’s 100MW battery system, Tesla and the South Australian government plan to install Powerwalls, the sleek batteries designed to bring solar power to individual homes. And rather than being an isolated, closed system, Australia will link tens of thousands of Powerwall 2s to the power grid so they can offer additional energy to the country during times of high energy usage.

Under the program, each household will be provided with a 5kW solar panel kit and 13.5kWh Tesla Powerwall 2. The solar panels will transfer converted sunlight to the Powerwalls, which store the electricity until needed. Any surplus energy is sent to the grid and distributed to other homes and businesses that face a power outage, effectively creating a massive “virtual” power plant. Tesla claims its battery storage system can power a home continuously for seven days before needing a recharge. This smart grid of homes has the potential to provide 20 percent of South Australia’s energy requirements.

The program starts with a limited trial of 1,100 government-owned properties before it ramps up to 50,000 households in the next four years, making it the largest energy system of its kind. The South Australian government believes the system will reduce energy costs by 30 percent. Best of all, participants won’t pay any up-front costs, a significant money-saver considering the price of a Powerwall, which can easily top $10,000 after installation. The government is assisting the rollout with a $2 million grant and a $30 million loan from the Renewable Technology Fund, a $150 million fund that supports renewable energy solutions in the region.

“We will use people’s homes as a way to generate energy for the South Australian grid, with participating households benefiting with significant savings in their energy bills,” the state’s premier, Jay Weatherill, said on Sunday. “Our energy plan means that we are leading the world in renewable energy and now we are making it easier for more homes to become self-sufficient.”

But the initiative could see major changes as South Australia preps for its next election on March 17. Malcolm Turnbull, the leader of the liberal party and current prime minister, swiped at Weatherill’s energy strategy, calling it a “reckless experiment.” His party’s opposition plan calls for solar panels and batteries to be installed in 40,000 homes in four years.

“South Australia is a great state, but we are being let down by an arrogant and dysfunctional Labor government,” Steven Marshall, the state’s opposition leader, said. “We must immediately address the economic problems that 16 years of Labor government has delivered or we will fall further behind the rest of the nation.”

Residents of South Australia can sign up to the program from the government’s virtual power plant webpage. Weatherill said 4,000 people had already signed up.

This isn’t the only way Tesla is making its energy storage systems available to the general public. The company recently announced that it will start selling solar panels, the Powerwall 2, and potentially solar tiles, in 800 Home Depot stores throughout the U.S.