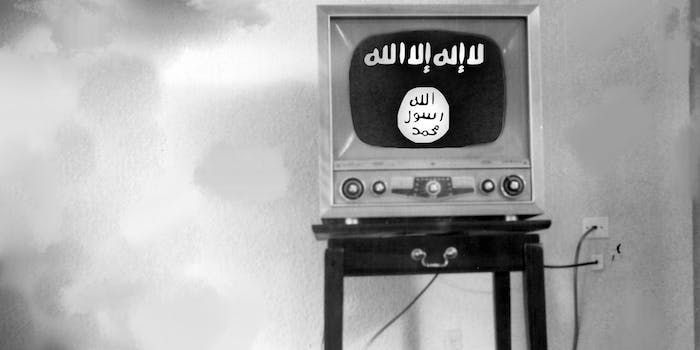 Steven Sotloff is the second American journalist to be killed by Islamic State in a month.

Two weeks after the the video execution of American photojournalist James Foley was released to the world by Islamist group Islamic State (IS), another disturbing IS video has emerged, that of the murder of American journalist Steven Sotloff. But this time, the militant group reportedly released the video by accident.

The new video, which was first brought to wider attention on Sep. 3 by Jihadi-tracking group SITE Intelligence, may well have been accidentally released on Twitter ahead of time, Vocativ reports.

The footage—entitled “A second message to America”—includes a forced “confession” from Sotloff and a “warning” to President Barack Obama from the apparent executioner, reportedly the same British Islamist who appeared in the Foley video. “I’m back Obama,” the masked militant says to the camera, “and I’m back because of your arrogant policy towards the Islamic State.”

There’s no longer any doubt that the video is genuine: U.S. intelligence agents have “reached the judgement that it is authentic,” and Obama is promising that “justice will be served.” Similarly, it’s clear that the footage was always meant to be made public eventually. However, whereas videos of this nature usually circulate on online Jihadist communities before going viral, a now-suspended ISIS Twitter account apparently published the video without proper authorization ahead of time.

Islamic State leadership have gone so far as to apologize to their supporters for this accidental leak, releasing an statement that has been translated as saying:

“A clarification about the mistake was made by ‘Uyun al-Ummah’ account, that has published the video before the official time.

“The user saw a tweet with the video and thought it was published officially. We tried to remove the video after we understand that his was published by mistake, and we are sorry to the followers of the Islamic State.”

Sotloff’s mother had previously released an emotional video appeal to Islamic State to spare her son’s life, and a spokesperson for the Sotloff family issued the following brief statement after the video appeared online: “The family knows of this horrific tragedy and is grieving privately. There will be no public comment from the family during this difficult time.”

The Islamic State holds further Western prisoners, and promises to “execute” the Briton David Cawthorne Haines unless the U.S., which is currently engaged in a series of military strikes against Islamic State targets, changes course. “You, Obama, have yet again, for your actions, killed yet another American citizen,” the masked militant says in the video. “So just as your missiles continue to strike our people, our knife will continue to strike the next of your people.”