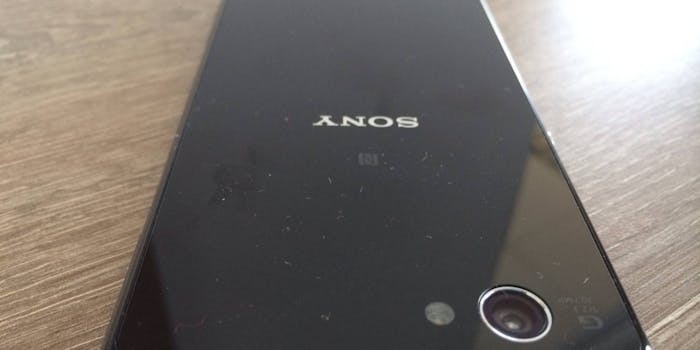 So many pixels, so little screen.

The premium model of Sony‘s next flagship smartphone will be equipped with a 4k display, according a video that leaked online.

Originally uploaded to a YouTube account belonging to Clubic.com, the video showed Sony’s marketing director, who revealed information about two iterations of the Xperia Z5 smartphone. Of primary interest was the Z5 Premium, which will feature a 23-megapixel camera, as well as waterproofing and dust-proofing that extend to the microUSB ports.

Of primary interest, though, is the 4k display that will be crammed onto the Z5 Premium’s 5.5-inch display (the standard Z5 will have a 5.2-inch screen). The Z5 Premium will be the first smartphone to carry such a screen.

A screen of that size with such a high resolution results in 800 pixels per inch (ppi). By comparison, the iPhone 6 Plus has a display resolution of 401 ppi. The Samsung Galaxy S6 and S6 Edge have the highest pixel count around for now, packing 576 ppi onto their 5.1-inch screens.

The Z6 Premium blows all of those numbers away, of course, but it’s up for debate of that many pixels is actually worthwhile. If you follow Steve Jobs’ logic that most people hold their phones about 10 to 12 inches away from their face and the human eye can’t discern much past 300 pixels per inch at that distance, then the Xperia Z5 is going for a new record in overkill.

There is some debate about this. Raymond Soneira, president of DisplayMate Technologies, responded to Jobs’ claim at the time to say a display would require 477 ppi for the pixels to become imperceptible to the human eye at a distance of 12 inches. Retinal neuroscientist Bryan Jones refuted Soneira’s claim and argued that Apple was indeed correct; Jones’ research found the human eye could perceive pixels at up to 287 ppi.

No matter which interpretation you subscribe to, 800 ppi appears to be excess for the consumer. Most people won’t be able to make out the difference in pixel density to truly appreciate the power of a 4k display at smartphone size. While it sounds good as a piece of information to toss out in the marketing package, it serves as little more than something to brag about.

Sony won’t be the last company to launch a 4k smartphone, but if you’re forking over extra just for that, it’s worth noting that you might never get your money’s worth.