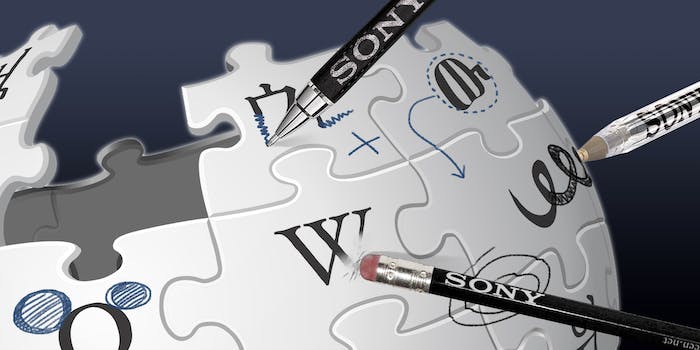 The finding reveals just how easy it is to tip the scales on Wikipedia.

A review of all the emails mentioning variations of the word “Wikipedia” found in the November Sony Entertainment Pictures hack found at least a dozen threads in which top level executives instructed underlings to edit pages related to Sony and Hollywood luminaries with whom the company has relationships.

On the surface, the finding makes perfect sense. Let’s say you’re watching the television series The Good Wife and you want to know what other shows Archie Panjabi, the actress who plays Kalinda, has appeared in. Or you’re viewing a film and see an actor who looks extremely familiar but can’t quite place him. You’re likely to Google the actor or film’s name, and chances are you’ll land on one of two websites: IMDb or Wikipedia.

Given those sites’ prominence as informational resources for all things Hollywood, it shouldn’t be a surprise that major studios have shown intense interest in how they’re portrayed there. It also shouldn’t be shocking that the ability to edit any Wikipedia page, almost completely anonymously, would prove too tempting for Hollywood executives looking to shape their public image.

Thanks to WikiLeaks’ release of a searchable database of all 173,132 emails exposed from the Sony hack, we now have at least some idea as to the extent that Sony employees have edited, without any disclosure, Wikipedia pages related to the company.

The Wikipedia community has long discouraged any page editing from the page’s subject or anyone with a financial conflict of interest. Though it’s commonly known as the encyclopedia “anyone can edit,” editors have long stressed the importance of neutrality, the notion that each page lacks bias or a point of view. The community hasn’t been able to agree on a set of specific guidelines for how those who have a conflict of interest can provide input on their pages, but founder Jimmy Wales stated in 2012 that he was against conflicted users directly editing article pages and preferred that these users reach out to unbiased editors to request changes.

In fact, Wikipedia editors and administrators have routinely outed individuals and organizations that have been caught editing their own pages, and these outings often lead to public shame and embarrassment (just Google the words “Wikipedia” and “caught editing”). If a conflict of interest is found, it’s not uncommon for the edits to be reversed and, in some cases of serial misconduct, for the conflicted user  to be outright banned from the site. In late 2013, I outed a company called Wiki-PR that had been caught creating hundreds of sockpuppet accounts it used to edit thousands of Wikipedia pages for paying clients. The outing eventually resulted in the company being banned by the Wikipedia community.

Many of the requested edits made by executives were for pages concerning the executives themselves.

Though neutral Wikipedia editors police the site for conflicted edits, the sheer volume of edits made per day ensures that many will slip through the cracks undetected. In the Sony emails I reviewed, I only found one instance where an employee mentioned having their edits reversed, and I saw no references to editors accusing these employees of making conflicted edits.

Many of the requested edits made by executives were for pages concerning the executives themselves. In December of 2013, Sony Entertainment CEO Michael Lynton shot an email to then-PR chief Charles Sipkins asking for modifications to his page. “Can we correct my Wikipedia page,” he wrote. “Lots of errors.” Sometime within the next month Sipkins must have delivered a draft of proposed changes for Lynton’s review. “Did you have a chance to review it?” Sipkins asked. “I’d like to update it when you’re ready.” Judging by the subsequent email thread, it appears these proposed edits were printed and hand-delivered, hence why there isn’t an included attachment containing them.

In March, Executive Vice President of Communications Paula Askanas emailed an unknown recipient pointing to the Lynton Wikipedia page as something her department could also create for the recipient. “We could do one for you with as little or much information as you like. Doing it is a little complicated but I think you ‘deserve’ one.” The unknown recipient responded with a single word: “No.” And then in March, Sipkins forwarded an email to Lynton summarizing the changes made to Lynton’s page:

We edited Michael’s Wikipedia page in order to provide more complete and updated professional information and also to reflect the personal information that Michael preferred was included.  We updated the list of SPE movies that we referenced, including recent Best Picture nominees and box office successes.  Similarly, we updated the SPT section to reflect current hits around the world and the accurate reach of the studio’s television channel network. We added information about Sony Music, including the labels, artists and recent Grammy wins.

Sony employees continued to edit Lynton’s page as late as October, a mere month before the Sony hack was announced. On Oct. 21, Sipkins informed Lynton that his biography had been revised and “we will update all of the relevant Sony web sites as well as your Wikipedia page.”

Lynton wasn’t the only executive who received the Wikipedia treatment. Amy Pascal, the chairperson who came under fire for controversial statements exposed in the email hack, approved her own revisions. In April 2014, Megan Klein, who’s listed as a director of public relations and communications on her LinkedIn profile, emailed Pascal to inform her “your official Wikipedia entry has been edited to reflect the updated biography that you recently approved.” Again, I couldn’t track down any email that contained the actual edits.

Since all scandals eventually die down, there will come a time when such edits may receive less scrutiny.

Though most of the emails I discovered pertained to Sony executives, there was one thread that concerned someone not directly employed by Sony. On July 31, a person using the address [email protected] emailed Dwight Caines, Sony’s marketing president, and two agents from the talent agency CAA. “I had asked weeks ago how the wiki page is looking,” he wrote. “Can anyone please tell me ? It can be maintained.” It’s difficult to determine who exactly sent this email, but based on several LinkedIn profiles I unearthed, Kanzeon Corporation seems to be a company affiliated with David O. Russell, the director of American Hustle. This bears out in a subsequent email, sent on Feb. 1, concerning several changes to Russell’s Wikipedia page, including an added link to his website and an updated list of accolades. It’s unclear why Sony employees felt an obligation to maintain Russell’s page.

Because many of the Wikipedia pages mentioned above have each been edited by hundreds of users, many of whom weren’t even logged in, it can be difficult to discern which users were making conflicted edits on the pages and what those edits were. However, I was able to locate at least one Wikipedia user who seemed to be working on Sony’s behalf.

Amy Pascal received an email in late April informing her that her page had been edited. I reviewed the revision history for Pascal’s page and found that a user called OnceaMetro had been the only one to edit her page in the days leading up to that email. Who is OnceaMetro? That’s unclear (a Google search led me to a soccer fan site with that name). But the user has certainly been busy. A search through his or her contributions page found thousands of edits to hundreds of pages. In some cases, those edits are for the pages of well-known figures like Elon Musk and Warren Buffett. But there are also quite a few edits made for banks, hedge funds, and capital investment firms—like Glenview Capital Management and Chicago Growth Partners—that the average user likely hasn’t heard of. While it’s unknown at this point whether OnceaMetro is a Wikipedia editor-for-hire, it wouldn’t surprise me if Wikipedia admins were to start investigating his editing history—that is if they aren’t already.

If it were to be revealed that such actions are common across the entire site, it would undermine Wikipedia’s credibility with the public at large.

Of course, ever since the news broke of the Sony hack the Wikipedia pages for many of the executives embroiled in the scandal have received thousands of edits and are now more closely watched than they otherwise would have been. It would be difficult right now for hired editors to sneak in changes or whitewash unwanted details without being noticed. But since all scandals eventually die down, there will come a time when such edits may receive less scrutiny.

Though I didn’t find any direct evidence of Sony employees removing negative information from Wikipedia pages, it’s not difficult to understand why the company having a direct hand in how it’s portrayed on the encyclopedia is problematic. If it were to be revealed that such actions are common across the entire site, it would undermine Wikipedia’s credibility with the public at large. Because its entire existence is made possible through user donations, it’s crucial that donors continue to have faith that they’re giving money to a just cause, and not merely propping up the public relations arms of monied interests.

“The fact that you are helping to pay the costs of running Wikipedia means it can stay ad-free and independent of bias, focused solely on helping its readers,” the email reads.

Given Sony’s future actions on the online encyclopedia, Wikipedia’s goal of remaining “independent of bias” was one not shared by Pascal or her employers.

The Wikimedia Foundation did not return a request for comment at press time.