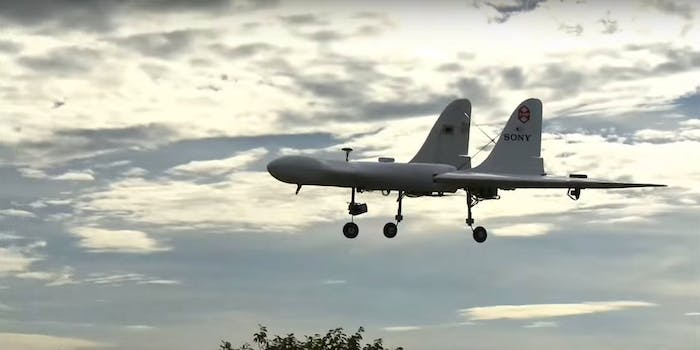 It's in the business of being fast.

The drone market is getting mighty crowded, but Sony intends to literally blaze past the competition.

Created by Aerosense, a joint venture between Sony and Tokyo-based robotics firm ZMP Inc., the airplane-shaped unmanned vehicle will serve business customers with its impressive speed. Beyond its ability to break the 100mph barrier (topping out at 106 mph), the drone will also be able to fly continuously for two hours and carry up to 22 pounds.

While many drones are targeted more toward consumer use, Sony is positioning its prototype for more commercial ventures. It’s less in the vein of the DJI Phantom and more in the category of Amazon‘s delivery drones.

Sony and Aerosense intend to use the drone to provide services like surveying land, inspecting infrastructure, among other offerings. The unmanned vehicles would be piloted based on user input that would point them in the direction of the area that require surveying.

Sony has big expectations for its fresh entry into the drone market; Hisashi Taniguchi, CEO of Aerospace and ZMP, suggested the company is aiming to hit $82.6 million in revenue by 2020.

The expansion into the drone market is somewhat surprising for the Japanese-based company. The crafts have become controversial in the country after one was used by an anti-nuclear protestor to place radioactive material on the roof of Prime Minister Shinzo Abe’s office earlier this year. The country has since considered stronger regulations on the airborne vehicles.