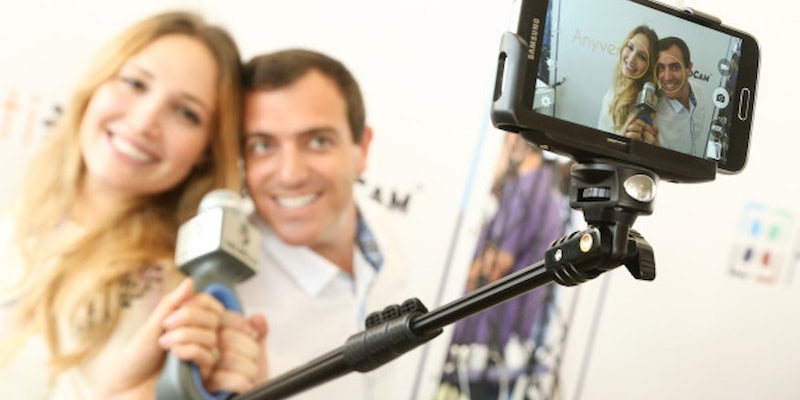 Few gadgets are as polarizing as the selfie stick, and a new Indiegogo campaign promises to stir things up even more by adding a microphone to the contraption.

The SoloCam looks like what would happen if a Bluetooth microphone and an extendable police baton fell in love. It’s essentially a selfie stick attached to a TV reporter’s microphone.

A plastic grip holds your phone an appropriate distance from the microphone so your voice and image can be perfectly captured without needing a single friend’s help. The SoloCam comes with an app that can operate as a teleprompter or a video-and-audio-effects mixer.

The basic SoloCam costs $49. For $149, you can get the “Pro” package, which comes with a bunch of accessories (like a GoPro adapter and a bag) and an upgraded “heavy-duty” stick.

“SoloCam may have drawn its inspiration from the selfie stick, but in the process of its creation, the team had to reinvent the design and purpose of the selfie stick as we know it,” reads the project’s description.

The SoloCam’s creators built a stronger selfie stick so it could hold a wide variety of devices, and they made it more stable than the standard stick so it produced better video shots. They also claim that it is more comfortable to hold than competing selfie sticks. They say they “had to create technology specifically designed to complement its functions,” but they don’t elaborate on what that means.

Whether or not anyone buys it, the SoloCam forces us to confront an uncomfortable part of the tech culture zeitgeist: Just how far are we going to run with the idea that an extendible metal arm is a must-have smartphone accessory?

H/T The Next Web | Photo via SoloCam/Indiegogo