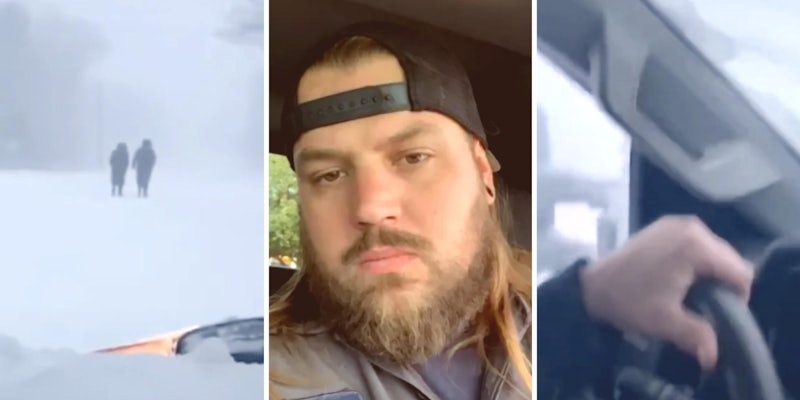 The New Jersey snowplow driver has reportedly been fired.

A snowplow driver is being investigated for a possible hate crime after posting a video that shows him spraying two Orthodox Jewish men with ice and snow during a winter storm.

The since-deleted video was posted to Facebook on Saturday. In it, the driver approaches two people on a snowy road in New Jersey. The pair wear the signature black cloaks and wide-brimmed hats of Orthodox Jews.

As he near the two men, the driver lowers the plow. The driver and a passenger laugh as the plow sprays the men with a large wave of snow.

The video went viral. Local news reports that the plow driver was Donny Klarmann, an employee of Waste Management. Klarmann posted the video to his personal Facebook page. It was captioned, “This one’s for you JC,” along with two laughing emojis.

The Daily Dot was unable to find contact information for Klarmann.

According to News 12 New Jersey, authorities are investigating the incident as a possible hate crime. Klarmann has been fired by Waste Management. The company said that he was off-duty at the time.

Waste Management released a statement to News 12, saying in part, “The hateful conduct depicted in this video is unacceptable and does not reflect the values and inclusion of diversity we hold as a company.”

The incident occurred in Lakewood, New Jersey. Lakewood Mayor Ray Coles told the outlet that he has little doubt this was a hate crime.

“Not only was it cruel, but it was also incredibly stupid and dangerous,” Coles told local outlet the Lakewood Scoop. “The plow could easily have thrown chunks of ice or rock and seriously injured or killed either of the victims.”

The men who were sprayed reportedly plan to press charges.

The incident captured in the video sparked widespread condemnation.

The regional branch of the Anti-Defamation League tweeted, “We are absolutely disgusted by this video footage which appears to show a snowplow operator intentionally and callously targeting two Orthodox Jewish men.”

Others captured the video before Klarmann deleted it.

TikToker @ohsorandom2009 was among those who reposted it. They speculated that the “JC” Klarmann referred to in the video’s caption refers to Jesus Christ.

“He drenched those two men with snow and ice. Those two Jewish men who were walking to temple,” @ohsorandom2009 said.

“…I just thought maybe with the help of you, we could give Donny all the attention he wanted.”

“Someone’s about to lose their job,” commented another. “Oh ya and this is going straight to police as a hate crime.”