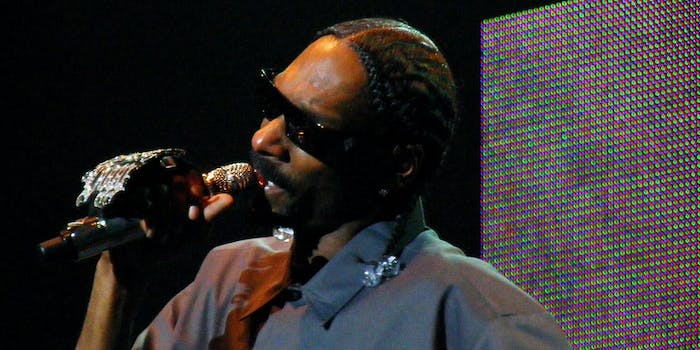 After helping to fund Reddit, we think it’s time the Doggfather made a few changes.

Thanks to a round of fundraising, noted venture capitalist and Hot Pocket spokesman Snoop Dogg can now add über-popular Internet hivemind Reddit to his investment portfolio. In a blog post on Tuesday, the social news site announced that in an effort to expand, it had secured $50 million in funding thanks to contributions from a who’s-who list of Silicon Valley.

While Y Combinator president Sam Altman and hair model Jared Leto were named as financial contributors, it’s the Doggfather himself that stands to make the largest impact on the site. Here are five ways Snoop could help improve Reddit.

If anyone understands the importance of diversifying your media empire, it’s Snoop. While he’s widely known for his music career, the California rapper also runs a highly popular Instagram feed and has recently expanded into producing video content. Reddit should take some cues from Snoop’s wildly popular YouTube channel, the Double G News Network. His videos take interviewing to new highs, literally, as the “Gin and Juice” singer shares a smoke with some celebrity friends. With in-house producer talent of his caliber, just imagine what the front page of r/videos could look like.

Snoop recapping Game of Thrones with a high Seth Rogen is about as close as a video can come to embodying the spirit of Reddit.

While Reddit isn’t the first name you think of when it comes to sports online, it doesn’t mean it can’t be. Snoop’s already proven he’s quite adept at franchises after taking pee-wee football to a professional level with his Snoop Youth Football League. Reddit should leverage his athletic know-how and turn some of the the site’s favorite pastimes into legitimate competitions. Let’s turn scrolling through r/spacedicks into a sport and see who can last the longest without bleeding from the eyes.

Never one to bogart that joint, the King of Kush realizes the importance of giving back to the cannabis community. That’s why Snoop has taken a turn as moderator of the site’s marijuana-centric gathering place r/trees. But for the former drug dealer, weed isn’t just a pastime, it’s a (legal) business venture. After all, this is the man who created the world’s first smokable book after publishing a bound set of rolling papers printed with his lyrics.

Ents, stick to smoking and let Snoop handle the business side of things. In no time you’ll be able to sell your own strain of sativa called Karma that you can hit out of a pipe adorned with a picture of Snoo, the Reddit alien.

While rappers often exude playboy personas, Snoop has enjoyed a happy marriage of 17 years to his high school sweetheart and “bosslady ent” Shante Broadus. With Reddit’s recent r/TheFappening debacle, its unchecked racial and sexual harassment problem, and the active misogyny in its men’s rights communities, Reddit could surely stand to improve its image as a place unfriendly to diversity. Let the D-O-double-G drop some feminist knowledge from a father’s perspective from a 2011 interview with The Guardian.

Snoop knows rebranding. With the exception of the artist formerly known as Prince, few musicians have rebranded themselves as often as Calvin Broadus. His moniker-morphing has included Snoop Dogg, Snoop Lion, Snoopzilla, and most recently, a white guy named Todd.

Since Reddit’s already earned itself a reputation as a place for white guys like Todd to connect, let’s let the OG change a few things.