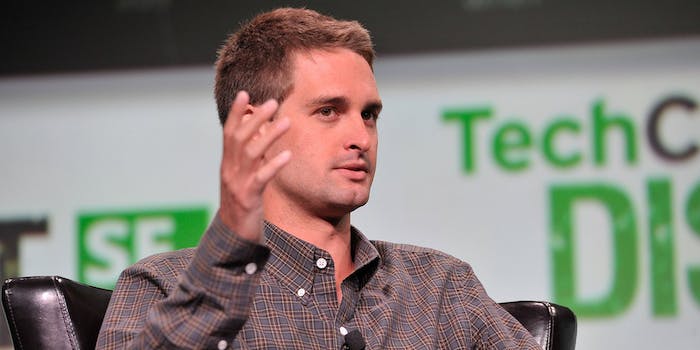 Sony Pictures Entertainment isn’t the only company whose secrets are out thanks to a massive hack of the company’s private data which was subsequently leaked online. Snapchat is now finding itself caught in the leak, and on Wednesday, CEO Evan Spiegel said the breaches of privacy have made him “angry,” and “devastated.”

Emails between Sony CEO Michael Lynton, Snapchat, and a Snapchat board member reveal that the photo and video messaging application acquired startups Scan.me and Vergence Labs, which cost the company $65 million total, TechCrunch reported. Documents also show that Snapchat was considering a move into music, but plans fell through.

And the leaked emails answer one of the biggest questions surrounding Snapchat—just how easy was it to turn down a $3 billion acquisition offer from Facebook? According to correspondence from Snapchat board member and venture capitalist Mitch Lasky obtained by Business Insider, Spiegel went back and forth about accepting the offer, and thought Facebook was low-balling the company. Emails also suggest that Zuckerberg blames Snapchat for leaking word of the acquisition offer to the press.

Spiegel responded to the email leaks in an email to Snapchat employees, which he posted on Twitter.

The CEO of a company that settled charges from the Federal Trade Commission for deceiving users about privacy, and whose company infrastructure allowed hackers to expose the personal data 4.6 million users, said that he felt like he was going to cry all morning after the leaked emails were published.

The note entitled “Keeping Secrets” describes how some secrets, like acquisitions and business deals, are necessary for the success of Snapchat, and that “it’s not okay that people steal our secrets and make public that which we desire to remain private.” Irony aside, the email was obviously written by a distraught Spiegel.

Spiegel ended the note with startup-speak. “We’re going to change the world because this is not the world we want to live in.”

The full email is as follows:

I’ve been feeling a lot of things since our business plans were made public last night. Definitely angry. Definitely devastated.

I felt like I was going to cry all morning, so I went on a walk and thought through a couple of things. I even ran into one of my high school design teachers. She gave me a huge hug. I really needed it.

And I really need to tell you that I’m so proud of all of you. I want to give you all a huge hug because keeping secrets is exhausting.

Keeping secrets means coming home late, after working all day and night. Curling up with your loved ones, hanging out with your friends, and not being able to share all of the incredible things you’re working on. It’s painful. It’s tirng.

Secrets also bring us together.

We care about taking the time to get things right. Secrets help us do that.

Secrets keep the space between our community and the public- space we need to feel safe in our expression and creativity.

I am so sorry that our work has been violated and exposed.

It’s not fair that the people who try and build us up and break us down get a glimpse of who we really are. It’s not fair that people get to take away all the hard work we’ve done to surprise our community, family and friends.

It’s not okay that people steal our secrets and make public that which we desire to remain private.

We are going to change the world because this is not the one we want to live in.