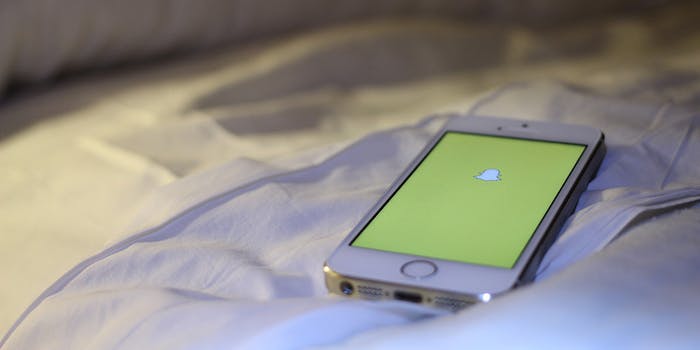 Snapchat update makes it easier than ever to screenshot a snap

Don't find yourself on the wrong end of a stolen snap.

The entire premise of Snapchat is to share thoughts, photos and videos that disappear shortly thereafter. Now, with Snapchat’s newest update—currently available for iOS and Android—capturing images and snapshots of video before they expire has become easier than ever, for better or for worse.

“Tap to view” is by far the biggest addition in the newest Snapchat update, and it allows users to simply tap a video or image in order to see it on the screen. Previously, viewing an image or video that was sent to you required you to hold your finger on the on-screen button—a feature that made it hard to reach your fingers to the home and lock buttons in order to use your phone’s built-in screenshot ability.

With the update, you can bring a new snap image or video up and then screenshot it without the additional hassle of holding your finger on the screen.

As always, taking a screenshot sends a notification to the sender of the snap, but anyone who has been on Snapchat for a while knows that there’s plenty of users who have taken to taking photos of their phone screens with a secondary device in order to save an image without alerting the person who sent it. But ‘Tap to view’ makes this sketchy practice easier as well, as a snap recipient can now tap a snap just once and then quickly use a second phone or camera to take a photo of the screen.

Snapchat has framed the change as one based on convenience, but the tweak may have unexpected consequences for users who find themselves on the wrong end of a screenshotted snap. You’ve been warned.

Photo via Pestoverde/Flickr (CC BY SA 2.0)