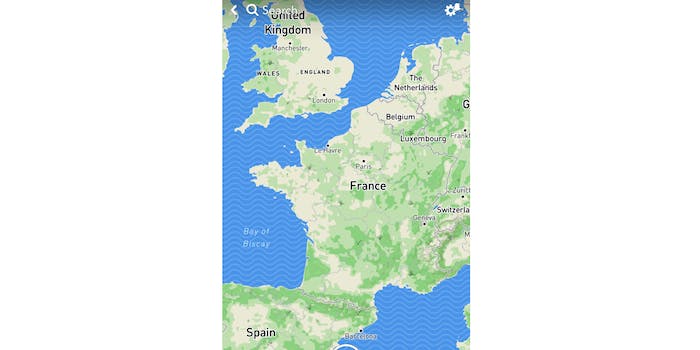 Man tracks girlfriend via Snapchat, finds her talking to a dude—and stabs him

The app isn't to blame, but maybe turn it off the location setting anyway.

This summer, Snapchat added a new feature to its app called the Snap Map. By pinching to zoom outward in the app’s camera screen, the Snap Map shows a real-time map of where all your Snapchat friends are. It quickly became clear that the feature could be a privacy nightmare. It also quickly became a tool Snapchatters could use to see who was sleeping with who—or who was cheating on who. Not everyone saw this function as simply curiosity fodder, though—one man in France used the app to enact violence.

On Halloween, a 25-year old man used Snapchat to find his girlfriend’s whereabouts when he discovered that she wasn’t at home. He rushed to her location armed with a knife, and found her in a car talking with another man. After a brief altercation, the boyfriend stabbed the man in the car in the thigh.

According to Le Parisien, the prosecution suspects a previous history of domestic violence.

In case this wasn’t clear: Cheating, Snapchatting—none of these things are to blame for violence. The violent man is.

But if you’re worried about your friends or strangers seeing your location all the time, head into your Snapchat settings and switch on Ghost Mode. To do this, go to Settings, and scroll down to See My Location. There, switch on the toggle for Ghost Mode, which hides your location from your friends. If you want to share your location with someone—say if you’re meeting up for dinner and want to check one another’s ETA’s—instead just use temporary location sharing through your SMS or messaging app, or in Google Maps.