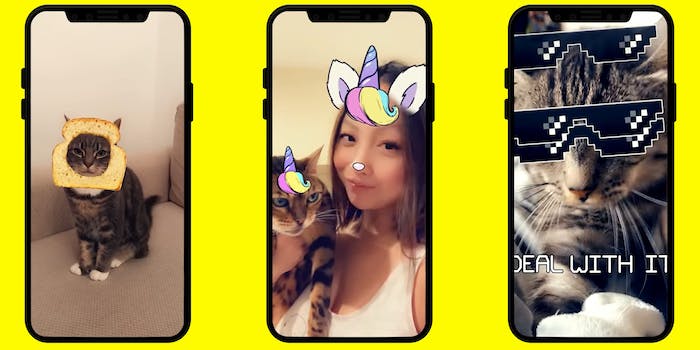 Now felines can have fun filters, too.

These days, adding a filter is just a natural step in the selfie process. Snapping a photo of your own face is arguably more enjoyable (if potentially harmful) when a filter gives you the appearance of flawless skin and silly accessories you don’t have to actually wear. Well, thanks to Snapchat Cat Lenses, now you can put a bread or glasses filter on your favorite feline, too.

Snapchat Cat Lenses let you apply photo filters to cats similar to the ones humans have been enjoying for years, the Verge reports. Released on Friday, the feature builds on object recognition that can identify inanimate objects like food and pets, according to TechCrunch.

How to use Snapchat Cat Lenses

Using Snapchat Cat Lenses is simple, especially if you’ve used Snapchat’s filters before. All you have to do is open your Snapchat app, select a filter on the screen, and hover your phone’s camera in front of your cat’s face to initiate some hilariously adorable photos.

With the filters, you have the option of giving your cat rainbow unicorn horns, puffy lips, or googly eyes. The filter can even simulate a piece of toast over your cat’s face.

The feature was just released on Oct. 12, but apparently a lot of cat lovers have already used the Cat Lenses to snap photos. The cats don’t seem too amused, but their owners seem to be having a blast.

snapchat has filters for cats and i’m a little too excited pic.twitter.com/HskO9R6X0X

Snapchat added filters specifically for cats and im all for it pic.twitter.com/kd0zFUnDZ8

Been doing this for years! pic.twitter.com/kLGGtRYcWo

Why Snapchat Cat Lenses are just for cats

It’s unclear why Snapchat chose to focus on cats and not other animals for its new feature. The facial-recognition technology works for some dog breeds, according to BBC. Sony is also developing its autofocus technology to identify animals. Maybe Snapchat will eventually create dog lenses specifically for canines. Until then, we’re sure to see a major influx of cat selfies.