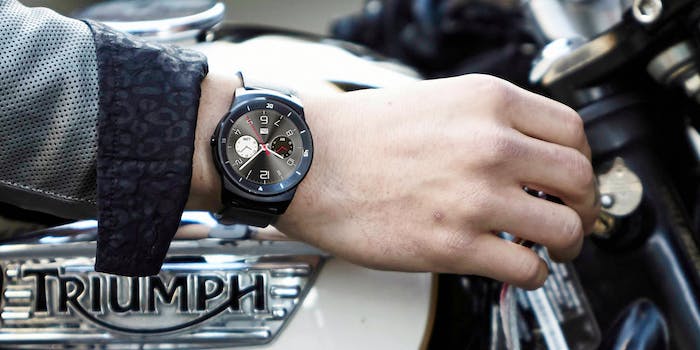 The days of ugly smartwatches are finally over

If you've been avoiding buying a smartwatch because (let's face it) most of them are ugly, times have changed.

If you’ve been avoiding buying a smartwatch because (let’s face it) most of them are ugly, your suffering will be coming to an end very soon. As the first generation of smartwatches nears its conclusion, the first devices of the second generation are perfect examples of what the future holds for the industry. And they look much, much better.

LG has announced its latest smartwatch, the LG G Watch R—with the “R” standing for round—as companies begin to move away from the square design that dominated the first generation of smartwatches. The LG G Watch R may be the best looking smartwatch unveiled so far, with an elegant design encapsulated in a stainless steel casing. A plastic OLED display means the G Watch R is viewable in sunlight, a key factor for a smartwatch that most previous releases haven’t been able to accomplish. Speaking on the shift to a round smartwatch, Dr. Jong-seok Park, CEO and president of LG Electronics Mobile Communications, said, “What we’ve noticed in the year of the wearable is that this is a category that can’t be compared to smartphones and tablets. Wearables are also accessories and consumers will want more than one to choose from.” The LG G Watch R is slated to be released before the end of the year. Samsung also announced a new smartwatch, the Gear S, a curved watch that isn’t round but moves away from the square designs Samsung has previously used in its Gear line. Unlike the G Watch R and Moto 360, the Gear S does not take advantage of Android Wear, Google’s wearable operating system, instead utilizing Samsung’s internal OS, named Tizen. The upside of Tizen is you can do things like make and receive phone calls directly on the Gear S. The downside is Tizen isn’t Android, and doesn’t have the amount of developers working on Google’s operating system. This limits the amount and quality of apps that are available, which may stop people from purchasing the Gear S. The design issues plaguing smartwatches seemingly has been addressed, but there are still drawbacks—like battery life—that need to be remedied. People don’t mind charging their phones every night, but a watch shouldn’t be subject to the same practice.