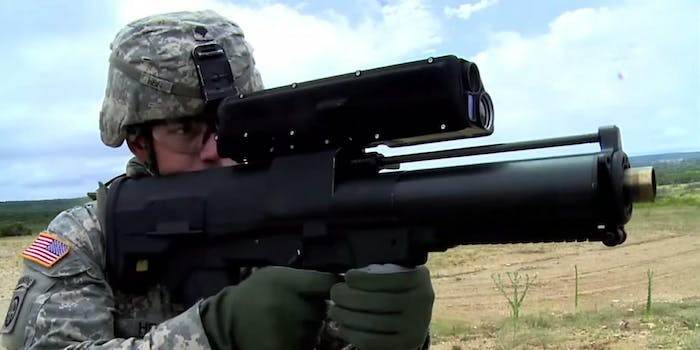 This new technology is explosive.

After five years of development, the U.S. Army will add smart grenade launchers to its sandbox of weaponry.

In 2010, the United States Army acquired prototypes of a new “smart” grenade launcher, with the intimidating moniker the XM25 Counter Defilade Target Engagement. The launcher’s ability to detonate grenades at any time, independent of impact, serves as its chief feature.

Typically grenades explode either on impact or after reaching a certain time limit. The XM25 offers users the control to blow up the grenade whenever, including aerially. With this feature, soldiers can achieve a “300 percent to 500 percent increase in hit probability to defeat point,” according to the specs listed by the XM25 makers, Orbital ATK. Additionally the XM25 provides a means of defense as it allows soldiers to operate it without having to expose themselves in the open to get a good shot.

Beginning in early 2016, the Army will begin field-testing the XM25. Before then, however, it will be officially showcased at the Association of the United States Army’s 2015 Annual Meeting and Exposition in Washington, D.C. going on this week.