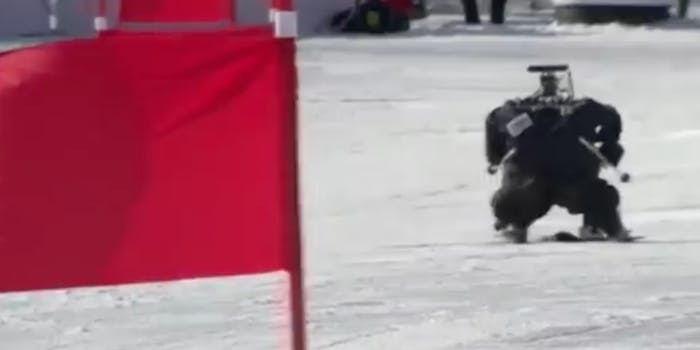 These robots are having an adorable skiing competition of their own

Robots vied for a $10,000 prize in a South Korean ski competition.

While humans are tackling the mountainous slopes of Pyeongchang, South Korea, vying for world titles at the Winter Olympics, skiers of a different breed are racing downhill just an hour’s drive away. At the Ski Robot Challenge in Hoenseong, eight teams hailing from various organizations, universities, and private sector companies are competing for a $10,000 prize. Their competitors, as you might surmise, are robots.

The competition has some stiff stipulations. Robots must be at least 20 inches tall and stand on two legs (so no BB-8 units allowed on this course). They must also have joints that allow their elbows and knees to bend, independent systems for powering their movements, and be able to wear skis and hold poles. The robots have to steer themselves down the numerous slaloms of the downhill course using onboard sensor technology.

To determine the winner, the robots earned points for both avoiding flagpoles and being the fastest to cross the finish line. The Guardian, which reported on the delightful event, compiled a video of the action you can watch below.

“Our robots cannot race in the Olympics so we organized this race during the Olympics period so that we can show South Korea’s robotic technology to the world,” Ski Robot Challenge organizer Kim Dong-Uk says in the video.

The skiing robots are extremely entertaining to watch. The crowd at the event, while smaller than that at the nearby human Winter Olympics, was just as animated.

Now that robots can ski, open doors, earn citizenship, and do all manner of other wonderful (or terrifying) feats, perhaps it’s time we ought to start considering a true Robot Olympics. At the least, we definitely need more events like the Ski Robot Challenge, which are a good reminder of our accomplishments and limits in the field of robotics—and that robots can be really adorable.