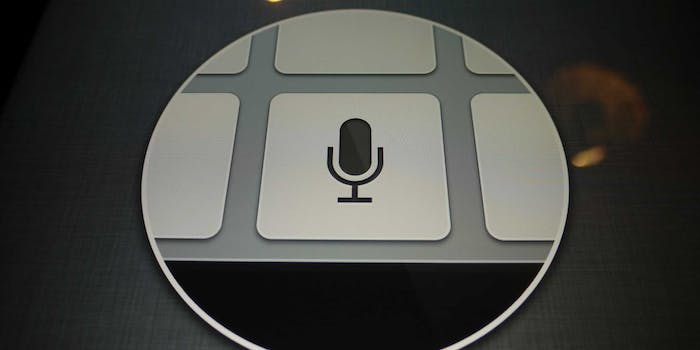 Someone might be listening to all your Siri conversations

There are lots of voice-powered apps. Where are all those words going?

Forget the government listening to your calls (don’t actually forget about it, it’s very important). You’ve been whispering into the ear of the biggest tech companies in the world thanks to your A.I. assistant.

In an unsurprising revelation confirming all of your worst Orwellian fears, a Redditor who goes by the username FallenMyst claims that she listens to the recorded conversations people have with Siri, Cortana, and other voice-powered search services. “I started a new job today with Walk N’Talk Technologies,” she writes. “I get to listen to sound bites [sic] and rate how the text matches up with what is said in an audio clip and give feedback on what should be improved.”

The post has blown up on Reddit, but it hasn’t necessarily revealed anything new. Apple has previously confirmed that it holds on to Siri recordings for up to two years, disassociating them from user accounts after six months and using the unidentified recordings for product improvement.

The job that FallenMyst describes in her Reddit post appears to get access to those audio files. The third-party company referred to as Walk N’Talk Techonolgies can be traced to a task listing on CrowdFlower (account required to view, screenshot from Redditor Roondak viewable here), a self-described “data enrichment, data mining, and crowdsourcing company.”

FallenMyst and others who do this job are given a text transcription and a corresponding clip of audio and are tasked with reviewing whether the text and audio match. According to the post, participants are given a five cent bonus for every 100 units completed with 90 percent accuracy.

There is no opt-out for the recording process other than not using Siri.

FallenMyst, who confirms she is a participant in this task, claims that she isn’t even paid in actual money, but rather in “Astros,” which she describes as “money for the little known online gundam game.”

If you’re looking to learn more about Walk N’Talk Technologies, good luck: A Google search for the company yields only a link to FallenMyst’s post, and there is no company by the name on LinkedIn, GlassDoor, or Better Business Bureau. FallenMyst believes the false name is intentional, and the lack of results “proves that they HAVE successfully concealed their identity.”

There are likely other companies doing the same thing. There are a number of positions in Amazon’s Mechanical Turk listings that ask people to “review short audio transcriptions.” Some of these could certainly be tied to similar purposes.

The best bet for where the outsourced quality assurance work comes from is Nuance, the company that provides the voice recognition software that powers Siri. According to Apple’s privacy information: “To help them recognize your pronunciation and provide better responses, certain User Data such as your name, contacts, and songs in your music library is sent to Apple servers using encrypted protocols.”

According to the text, Siri and Dictation (Apple’s speech-to-text app) don’t associate the information with an Apple ID, but instead with the device itself through a randomly generated identifier. That identifier can be changed at any time by turning Siri and Dictation off, then back on, thereby resetting the identifier (and restarting the personalized learning process). There is no opt-out for the recording process other than not using Siri, though users can deactivate location services in the privacy settings to further disassociate any personal information from the recordings.

Users of Google Now, the search giant’s voice-activated personal assistant, are also recorded during their searches. The information is linked directly to a user’s Google account and can be accessed by the user so they can review previous searches at any time. According to the history page of a user’s account, “only you can see your history” and recordings can be deleted at any time.

Users can pause this recording feature at any time by going to the Settings tab in their audio history, though Google warns that doing so “may limit or disable features such as using ‘OK Google’ to start a voice search and reduce the accuracy of speech recognition across Google products that use your voice.” It also notes “Google may also continue to collect and store audio data in an anonymized way.”

While none of your personal information may be shared in association with the audio recordings that FallenMyst and others are listening to, it’s good to be aware that the questions you’re asking of your personal assistant aren’t just taking place between you and your virtual helper. If you’re a Google user, go listen to the audio recordings of your previous voice searches. Now imagine how embarrassing it would be to have others hear you ask Google for rash treatments.

These three companies are fairly forthcoming about their treatment of voice-generated data; that’s not what’s surprising. What’s surprising is that there isn’t any sort of opt-out for what happens with this data. We can opt-out of facial recognition tagging and sidebar ads. We can encrypt emails and use anonymous search engines. But as it currently stands, we can’t do a whole lot about what happens to the voice data we’re giving over to A.I. assistants.

Once our spoken words are out there, into the ether and recorded by our phones, then what? Then this, apparently.

The Daily Dot is currently awaiting responses from Microsoft, Apple, and Google about these claims.