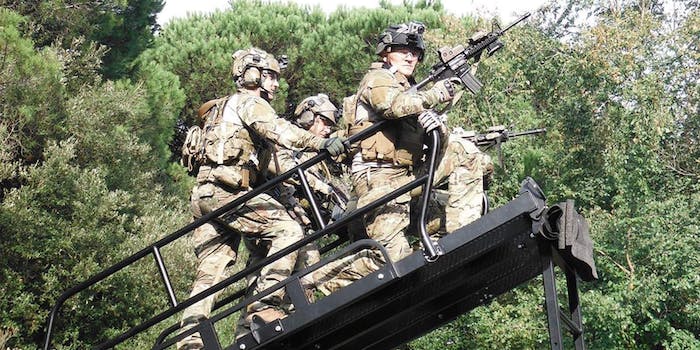 It may go down as the worst coup d’état in history.

This weekend’s failed attempt to overthrow the Venezuelan regime was apparently carried out on spec by a bumbling bunch of mercenaries in fishing boats armed with at least one non-lethal Airsoft gun whose team leader literally tweeted about the attack as it was ongoing. Oh, and the Associated Press reported on the plot days earlier—not that it mattered, as Venezuela had infiltrated the group by late March.

That they failed is less of a surprise than the fact they were able to reach the beach at all.

On Monday, Venezuela President Nicolás Maduro announced the capture of 13 people attempting to oust him. Six others were reportedly killed in the melee. (Original reports indicated eight perished.)

Most involved are Venezuelan expatriates. Also included among those captured are two U.S. citizens whom Maduro called “professional American mercenaries.”

Maduro accused the U.S. government of plotting the attack, likening it to the Bay of Pigs. On Tuesday, President Donald Trump denied this, telling press that they only learned of it after the men were captured.

As the Daily Dot has previously reported, Trump wanted to invade Venezuela at one point.

Following their capture, Silvercorp owner Jordan Goudreau, also a former Green Beret, confirmed to the AP that his company was indeed in charge of the coup attempt, nicknamed Operation Gideon. Denman and Berry reportedly served with Goudreau in Iraq and Afghanistan.

Goudreau said they planned to train soldiers and ultimately capture and overthrow Maduro to “liberate” Venezuela.

The U.S. is among 60 countries that consider Maduro’s rule illegitimate and support his opponent Juan Guaidó.

Goudreau claims that they were working for Guaidó, which Guaidó denies. Goudreau has admitted that they were never paid; nevertheless, the company spent months planning the failed raid. The AP reports that Goudreau met with Guaidó’s representatives in Miami last May.

To infiltrate Venezuela, Silvercorp amassed a force of 62 people, loaded into fishing boats and attacked a heavily fortified coastline with gear that included walkie-talkies, night-vision goggles, and at least one Airsoft gun. They were easily detained by local fishermen.

Goudreau is presumably the person who tweeted about the raid on Silvercorp’s since-deleted Twitter account. The profile picture is one of him in a suit with the American flag draped over his shoulders.

“Strikeforce incursion into Venezuela. 60 Venezuelans, 2 American ex Green Beret @realDonaldTrump,” read the May 3 tweet, which can still be found on the Internet Archive. Because who doesn’t tweet about ongoing covert missions.

The failed attempt to capture Maduro appears to have been a last-ditch effort to resurrect a previous plot that fell apart in recent months.

On Friday, the Associated Press reported that Goudreau had been involved with plotting a coup that never came to fruition due to a combination of poor planning, the arrest of the purported ringleader—Cliver Alcalá—on drug charges, and the fact that Maduro’s agents had infiltrated the effort.

In spite of this and the overwhelming odds against them, over the weekend, Goudreau appears to have decided to do the coup.

The CIA reportedly learned of the plan and tried to talk them out of it. It didn’t work.

Neither did the coup.

In something of a plot twist, the likes of which have been admittedly common since 2016, Silvercorp apparently previously provided security to Trump. The company’s website says Goudreau “has planned and led international security teams for the President of the United States.”

When Goudreau met with Guaidó’s representatives, he was reportedly traveling with Trump’s longtime bodyguard Keith Schiller.

Numerous outlets have reported that Silvercorp’s Instagram included since-deleted posts that appear to confirm its work for Trump.

The company’s Instagram—because every good mercenary knows the importance of building a brand—is also littered with images of dudes in camouflage playing war, spiced up with a couple of treadmill workout videos and the odd thirst trap. In February 2019, Silvercorp posted a video from a concert, writing, “Venezuela Aid Live. Controlling chaos on the Venezuela border where a dictator looks on with apprehension.”

Among the many hashtags on the post are #potussecurity (presumably referring to providing security for Trump), #activeshootertraining, and, of course, #grind.

In another post, the company brags that its methods are “dynamic and surgical.”

Silvercorp is getting thoroughly mocked for the failed plot on social media. Twitter users have called it the “Bay of Prigs” and “Bay of Chads.”

Denman and Berry remain in Venezuelan custody. It is unknown whether the U.S. will negotiate for their release.