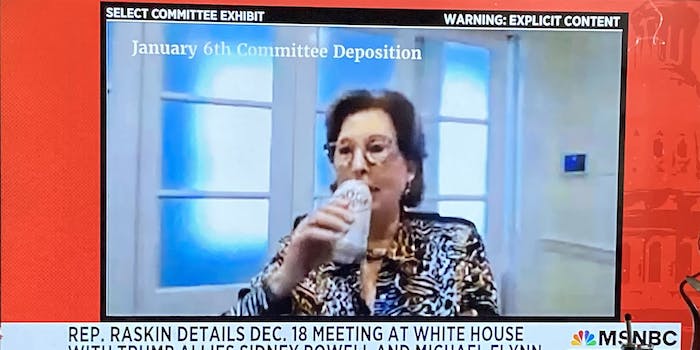 'Not all publicity is good publicity.'

The congressional committee investigating the Capitol riot continued its hearings today. The committee explored extremist groups’ role in the failed insurrection and delved further into the inner workings of the White House in the weeks leading up to the riot. The hearing is a somber examination of the most serious threat to the United States’ democracy in centuries.

Sidney Powell and a can of Diet Dr. Pepper provided a rare moment of levity during the hearing. Powell is a conspiracy theorist attorney who worked tirelessly, if fruitlessly, to overturn the 2020 election in favor of former President Donald Trump.

The committee played a clip of Powell’s testimony about a heated White House meeting held Dec. 18, 2020. After that meeting ended, Trump posted his now infamous tweet urging supporters to travel to the Capitol on Jan. 6, writing, “Be there, will be wild!”

After relating what she told Trump during that meeting, Powell took a huge swig from a can of Diet Dr. Pepper.

Many felt sorry for the beverage, whose original version debuted in 1885. The diet variety Powell apparently favors launched in 1962.

“Probably not the product endorsement Diet Dr. Pepper was looking for,” @nycneets commented.

A few wondered if this presumably unintended exposure would affect demand for Diet Dr. Pepper, or even Keurig Dr. Pepper’s stock price.

“Dr. Pepper: ‘not all publicity is good publicity,'” @iamgabesanchez tweeted.

Some felt betrayed by the beverage they’ve known all their lives. “I’ll never look at Dr. Pepper the same,” wrote one.

Dr. Pepper’s most recent tweet resurfaced, to much hilarity.

“Can you guys write some tweets for me about how everyone deserves a Dr. Pepper? I’m taking a break bc I deserve a Dr. Pepper. Thx Peppers,” the brand tweeted Monday afternoon, oblivious that would soon take an unlikely starring role in the Jan. 6 committee hearing.

“When I’m testifying about doing the coup, I like the refreshing taste of @DrPepper,” wrote @HurricaneCake.

As the hearing continued, the timeline turned into something of a Diet Dr. Pepper happy hour.

“Sydney Powell giving a ridiculous answer and then immediately chugging a Dr. Pepper is a g’damn SNL skit,” WifeySpice90 tweeted.

Numerous observers were simply grateful for the laugh.

“The editor who left in the long Diet Dr. Pepper gulp needs to be commended,” @ScottAukerman tweeted.