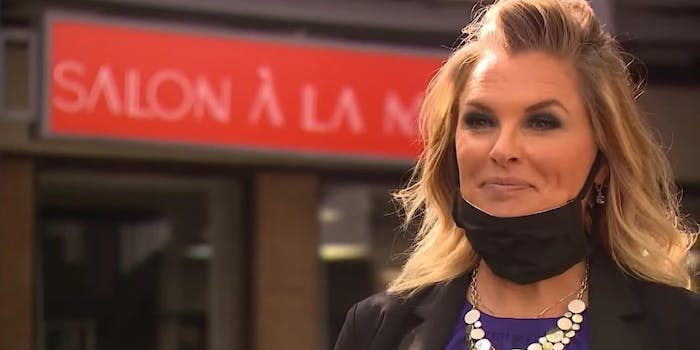 Arrested salon owner’s GoFundMe raises $500,000—but it was created before she reopened by a QAnon-touting group

Shelley Luther was recently arrested after refusing to shut down her Texas salon.

A GoFundMe for a Texas salon owner raised over $500,000 after she was arrested for reopening her business early, then refusing to shut down. Now, Texas Monthly reports the GoFundMe was launched a day before she even reopened.

Texas Gov. Greg Abbott laid out a public safety plan that allowed the state to reopen in phases. Phase two, which would have let hair salons reopen, was scheduled to go into effect on May 18. Yet, Shelley Luther reopened her Dallas hair salon, Salon à la Mode, on April 24. Abbott later went on to let hair salons to reopen on May 8. The early salon reopenings is something Luther has taken credit for, telling CBS 11, “I think it has a lot to do with my case.”

Luther was arrested and spent two days in jail on a contempt of court charge before being released early with the help of Abbott and Attorney General Ken Paxton, according to CBS 11 (Abbott changed his order a day after Luther’s sentencing, eliminating jail time for violating his orders).

The GoFundMe campaign for Luther, which raised $500,085 before being disabled, was launched on April 23, a day before Luther reopened. It was organized by Rick Hire who appears to be affiliated with a group called the “Woke Patriots.” The group hosts a group for QAnon believers on its site.

“People want to know who we are. We have a new website (wokepatriots.com) that we will be promoting soon, where we can take on causes like Shelley’s and post uncensored news articles and give people a voice,” the campaign reads.

In the campaign, it states Luther will be getting 100% of all donations.

“Before Shelley opened her salon, we researched her and her cause and decided that we would approach her and offer to support her as our first patriot cause. She accepted our offer and we have raised over $220,000 so far,” the page reads.

CBS 11 reports Luther plans to use the money to pay legal fees and mortgage. She then plans to give some of the money to other beauty technicians who were arrested for also defying the state’s orders.